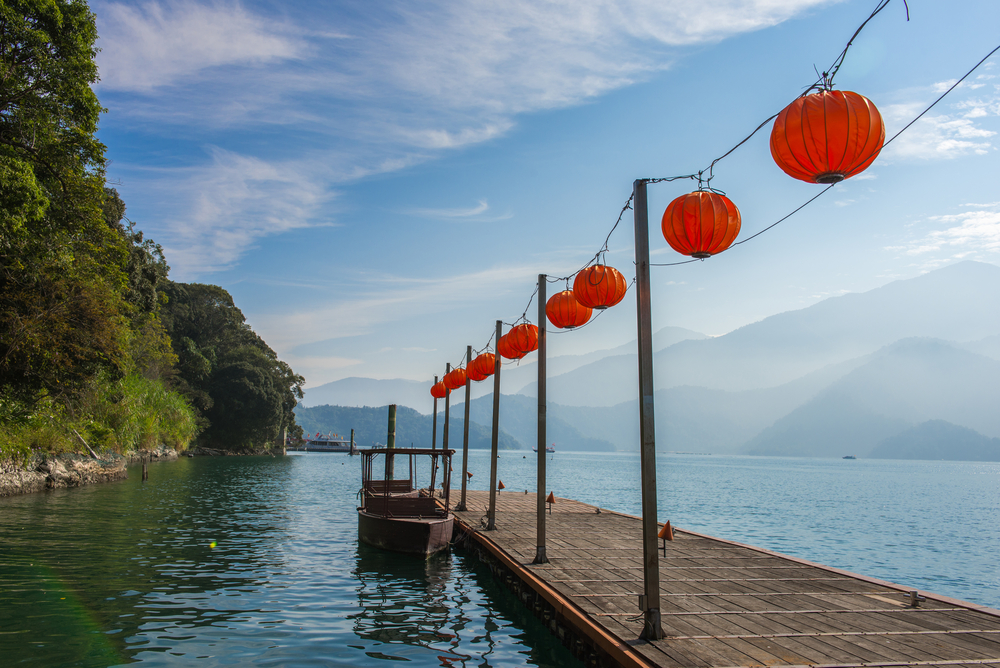 [intro title=”Why Stopover in Taiwan?” text=”We’ve compiled a list of 12 reasons Taiwan deserves a few days on your RTW itinerary.”][bannertop]
It’s a sad and unfortunate fact that many travelers don’t rank Taiwan high on their travel wish list; it may be the most underrated of all the SouthEast Asian countries. The Portuguese originally called Taiwan Ilha Formosa or “beautiful island” – and four centuries later, it still fits the bill.

Situated 80 miles off the coast of mainland China, Taiwan’s abuzz with what’s new and not so new. The western half of the island may be almost uncomfortably urban, but the eastern half holds mist-covered mountains, hot springs, national parks, white sand beaches. To highlight the missed opportunities of skipping a connection in Taipei, we’ve put together a dozen things to do on a stopover in Taiwan.

Situated on the northern coast of the island, Taipei reigns supreme as the nation’s densely populated capital. It’s a good place to shop and strain your neck looking at skyscrapers, but that’s about it.

2. Scale the Taipei 101 – Towering at nearly 1700 feet, this is the world’s second tallest building. Catch the view from the top and prepare to have your mind blown.

A note about getting around Taipei: You can travel around the city by metro or bus but English is hardly widespread. Study your timetable at length before you leave and if you’re planning on cabbing it, have your destination written down in Chinese for the driver. 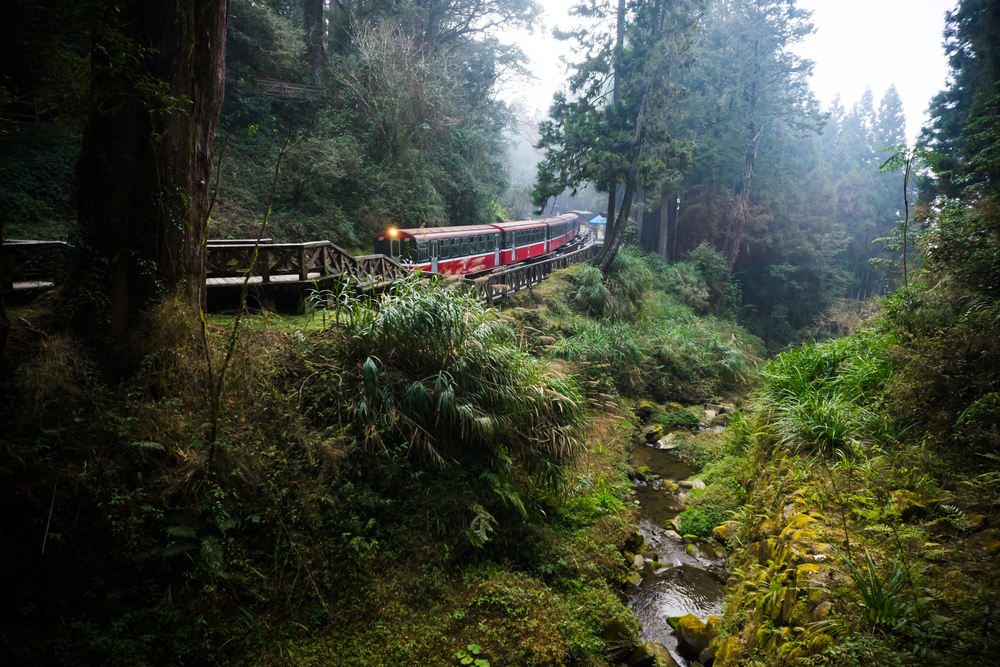 3. Stroll the shores of Sun Moon Lake – take a lazy lakeside toddle around this picture-postcard bit of scenery in the country’s central mountain range. When the mists spiral upwards to reveal rainbows over Taiwan’s biggest lake, make sure you get that picture. Ten miles north check out the massive Chung Tai Chan Monastery. Its architecture blends modernity with traditional Buddhist style.

4. Take the Alishan Forest Railway up the hill – Ride this historic narrow-gauge railway from the rice paddies of the lowlands, traversing tunnels and bridges up to the lush evergreen forests at 7300+ feet.

5. Wander Taroko Gorge – Taroko National Park is Taiwan’s most visited park, but don’t let that stop you from visiting. The Gorge is a perennial crowd-pleaser (and for good reason) with its 500-foot cliffs, cascading waterfalls and mist-shrouded forests. 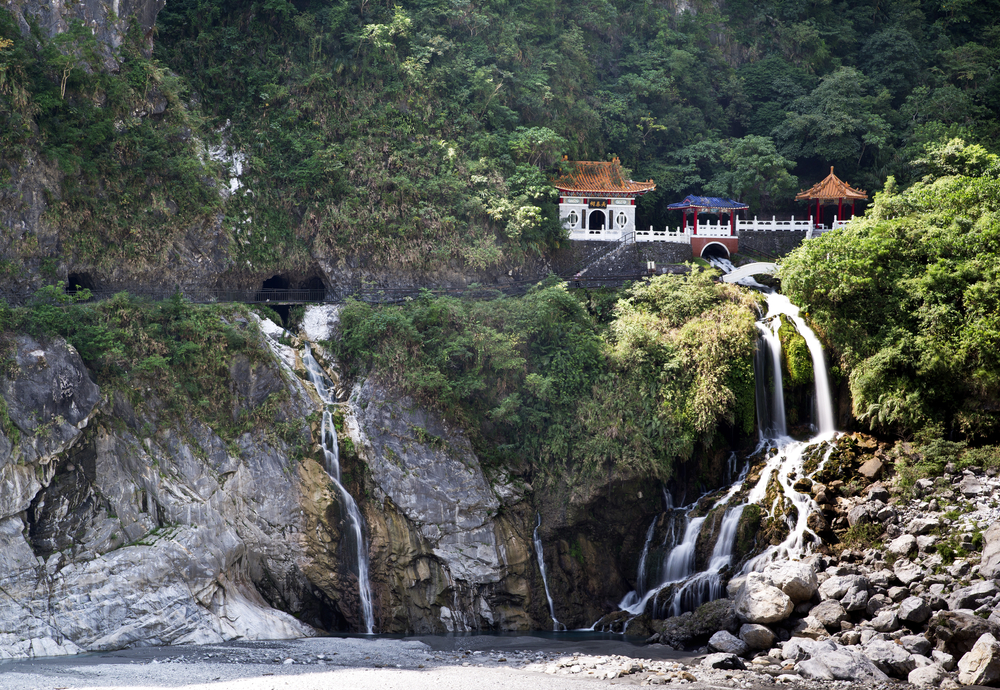 6. Drive Highway 11 – One of the two scenic north-south routes on the east side of the island (the other is Highway 9), this route follows the shoreline along the East Coast National Scenic Area, showcasing some of the most picturesque coastal scenery in all of Taiwan.

7. Laze on the beach in Kenting – At the very southern tip of the island is the famous Taiwanese beach and vacationer’s paradise of Kenting. Few non-natives make it down this way, and it’s too bad. It’s a great place to snorkel, dive, and soak up the sun on white sand.

8. Ride the bullet train – There’s nothing like sitting in comfort, sipping a coffee, while the world blurs by at 150mph. Taiwan has one of the fastest trains in the world, catapulting you the 215 miles from Taipei to Kaohsiung in just 90 minutes.

9. Relax in a hot spring – There are more than 150 hot springs scattered throughout Taiwan.  Many of these springs’ waters are piped right into local hotel rooms and spas. Two of the most popular are Wulai and Yangmingshan, in the Volcanic National Park, both less than an hour from Taipei.

10. Noodle up – Hit up a back-alley noodle shop and eat cheap. You can get a tasty and filling bowlful for less than you’d pay for a soft drink in U.S. restaurants.

11. Take a martial arts class – Kung fu and Taekwondo are commonly taught here, and there are even masters who will take foreigners under their wing. They can even help you get a visa extension if you want to stay a while and continue training.

12. Get a job – Teaching English is a common way to make money while on the road and the opportunities in Taiwan are plentiful. There’s even a heavy favoritism displayed for the North American-English accent. You can make up to $20 per teaching hour, and even more for private lessons. Check out English in Taiwan for details.

If you’re coming from the USA, Taipei is a great stopover opportunity with China Airlines and EVA Air providing flights from the west coast and continuing  on to China, Korea, and even India.
» Read: how to save money for around the world travel.
» Read: 7 steps to making your around the world trip a reality.