Ask any veteran traveler and they’ll tell you one of the best things about the act of traveling is the moment you come face to face with something, a place or structure so impressive, so timeless and eloquent, you simply can’t find the words to describe it. You stand stupefied, looking, utterly moved by its sheer presence, with a heaviness you can’t quite understand.

These places are fairly uncommon in the world and are typically spread out across the globe, requiring some kind of around-the-world plane ticket to get to the ones you want to see, but will inevitably make the backpack lifestyle, the transportation snafus, the terrible airport connections, the horror stories all worthwhile.

Today I’ve listed seven places in the world I have a special fondness for, those that left me in a state of awe, wondering and dreaming. These places weren’t chosen because they’re secret, or because they’re some kind of “hidden gem” (man, I hate that term) but simply because they left an intense impression on me, which is, in my opinion, the best way to judge any place you travel so far to see.

These places may also be squarely on the beaten path, and for good reason, but this fact should in no way deter you from making your way there. Amazement is amazement no matter how many other people are amazed alongside you. 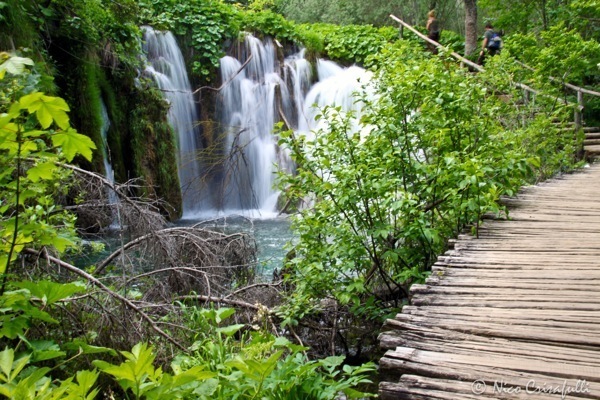 Having discovered the impossible green of the lakes of Plitvice only recently before going there, I was a newcomer to my feelings about this magical place. Plitvice greets you like you’re falling off a cliff, literally. Your first glimpse is as you walk to the edge of a cliff and look down. Hundreds of feet below you see a color almost impossible to grasp – the character is wildly surreal and there’s an ageless geology to the setting. That first moment is enhanced with each new panorama you see during your long and memorable day mingling with a mystic and penetrating green.

Spend hours there, imbibe the scenery. Take the long hike, the 5-hour one. Arrive early on a weekday to escape the crowds. Take in a waterfall, really see it, imagine that same water falling over that same ledge 3 million years ago. Plitvice is not expensive and the surrounding countryside is filled with fascinating history so be sure to add this sacred spot to any Croatia roadtrip. 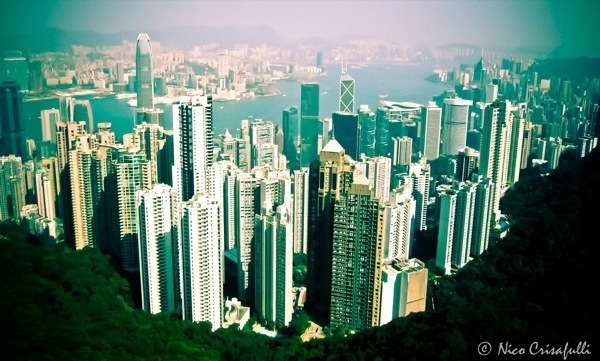 Hong Kong is a picturesque city to begin with, one that will draw out long mesmerizing gazes, the towering columns of humanity all trying to live comfortably stacked on top of each other. But then, after a train ride up to the top of Victoria Peak, a ride that’s more an act of God than a feat of engineering, you’ll come to the edge and look out at Hong Kong Island and Tsim Sha Tsui beyond. You’ll see the multicolored spires precariously balancing on their foundations, as if the island were nothing but a giant pincushion, each building teetering upright in an obvious attempt to defy physics. The view from Victoria Peak will stay with you as long as you live.

Come during a dynamic time of day, sunrise or sunset, the Golden Hours, catch nature’s color at play with the endless numbered towers. At 8pm, downtown explodes in a mysterious and spectacular laser light show, which will make you happy and satisfied you stayed on the mountain to see it from that angle. Pay the fee to climb up into Peak Tower. 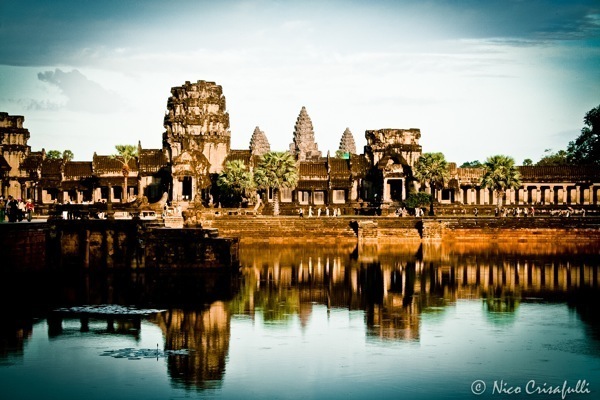 It’s more than likely you’ll roll up to the entrance of Angkor Wat in the back of a breezy moto-rickshaw and you’ll see the three crinkly pineapple towers of the temple bathed in mist, or else silhouetted in front of a blazing orange sunrise, and these three sister towers will burn into your memory. There’s something decidedly unimaginable about these towers, incomprehensibly old, beyond your puny little mind, even as someone who has seen everything. Then you go in, your eyes fixed on the towers getting closer, crossing the moat, passing through the outer complex and approaching via the pilgrims road, transfixed, losing a firm grasp on your present time but transported backward through the eons, your mind opening, a long lost industrious people just at the tip of your tongue. And then you touch the ancient lichen-covered rock gently, with your fingertips, and the feeling is made tangible.

Don’t let the crowds bother you. There’s plenty of room to stretch out and get some space inside the temple complex. Bring a picnic. Find a tree and sit under it. Light incense. Eat. Loose yourself. Come back the next day. Repeat. 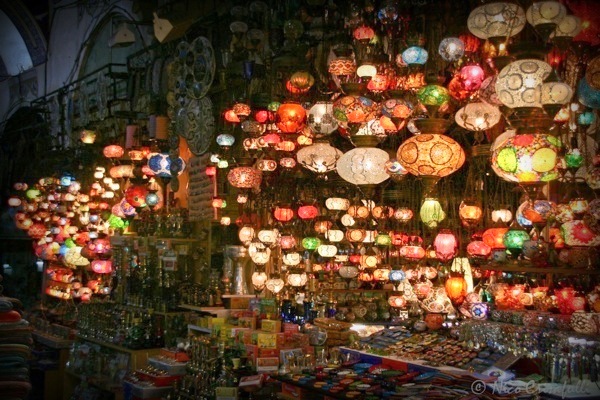 The labyrinth carved into the heart of one of the world’s oldest and arguably most interesting cities cannot be fully taken in at once, which makes the Grand Bazaar so much different than the other places on this list – you can’t see it all at once but only as you walk through it, dreaming of its history, spice trades, Silk Roads, camel caravans, and a little Harry Potter sprinkled over the top. The Grand Bazaar comes to you in waves, as you turn corners, discovering alcoves and hidden passages that house countless items of magic. Others have discovered it before you, sure, but the trinkets of fabulous means flash before your eyes and gradually you understand the fabric of the Grand Bazaar. After hours wandering in its agelessness, haggling with the salesmen, with Turkish coffee, apple tea, and fragrant perfumes thrumming your senses, you exit, tingling from wonder and sheer exhaustion.

Rug salesmen are relentless, approach with care. Weekends are tougher at the Grand Bazaar due to thicker crowds but you’ll get less hassle from shop owners if there are more shoppers around. Balance the crowds, don’t take all your money with you, watch out for pickpockets, and don’t be a Muggle! 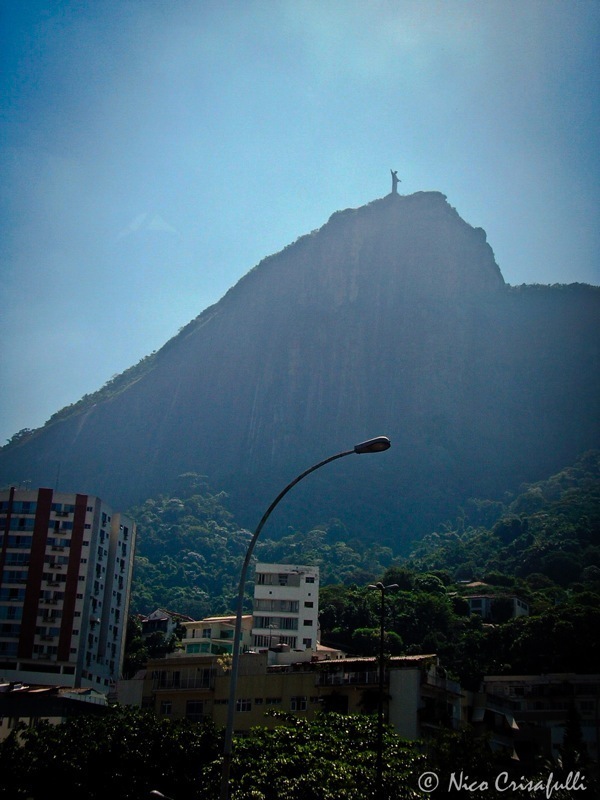 The near impossibility of having such a statue in such a place matters little when traipsing up the final steps to the pinnacle of the Corcovado, the Christ the Redeemer. Slicing through the hoards of the pious to get your first look out over one of the most wondrous city landscapes in the entire world is the preamble to shimmering bays, the tree and building-blanketed undulations of the rocky and rolling landscape of Rio de Janeiro. You’re aware of the sheer number of people at your feet but can’t fully comprehend it. You also underestimate the benevolent figure that looms above you. But you certainly understand his benevolence as you stretch out your arms to embrace that beautiful vista.

The train is the most practical way to access the summit of Corcovado. They leave every 30 minutes from the base and take 20 minutes. Take your sunscreen, your panorama camera, and release all your preconceptions about the most beautiful place you’ve ever been. 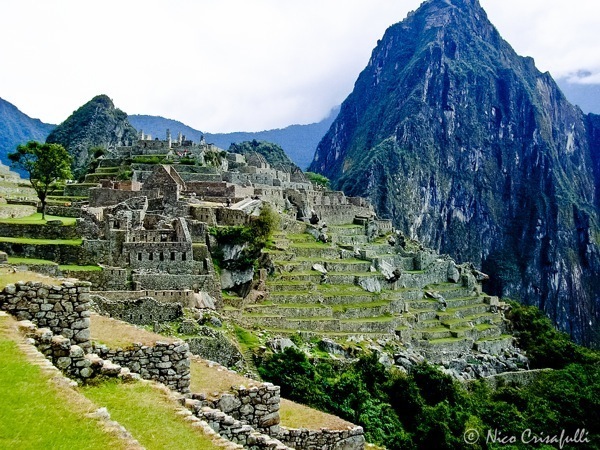 Up in the clouds, quite literally, is one of the world’s most timeless places, with a moniker (The Lost City of the Incas) that only adds to the enigma of that place. Every stone envelopes you: how did they… what tools could… where did they get… who could dream of… and you get lost in thought envisioning the obviously high quality of life of these ancients, living perfectly harmoniously with the climate, the elevation, the winds and the stars. You step through the archeology and can’t quite explain exactly what you feel, your closeness with a lost people, a civilization for the most part before time itself. It affects you intensely and once you see it you’re forever changed without really knowing why. Machu Picchu is a deep well of wondrous water.

Don’t feel obligated to leave on the evening train after only 4 hours. Stay the night. Marvel in two stages. Also: the main entrance for those that bus up to the site is fairly unspectacular—the first sightlines can leave something to be desired. For the most awe-inspiring “unveiling,” do the Inca Trail trek and catch your first glimpse of the citadel through the Sun Gate. Prepare to feel the breath leave your lungs in one big rush. 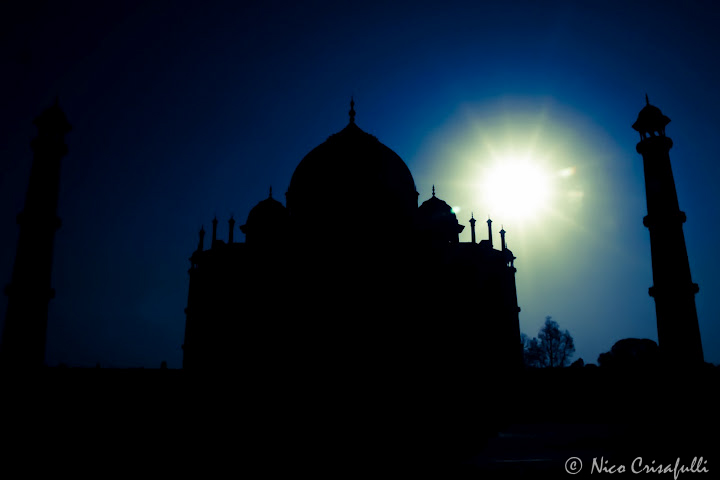 While it may be one of the most over-hyped and hackneyed images in the entire world, nothing can quite prepare you for seeing the Taj Mahal with your very own eyes. I should say that I’m not terribly easy to impress, but stepping through the arch that conceals the building from early glimpses, I first saw the pearly domes glistening in the pre-dawn haze and tears came to my eyes. Tears! The beauty of the Taj is truly remarkable. And something, yes, that will take your breath away, no matter how jaded, cynical, or world-weary you are. Even crowds, even heat, even thieving monkeys cannot diminish the effect of seeing this remarkable structure for the first time. Its beauty is eternal.

Wake up early and catch the sunrise at the Taj Mahal (just do it!). You’ll be doing yourself a favor. And don’t bring your tripod. It won’t come in with you. Make a point of seeing the Taj from the Agra Fort, perhaps the day before. It’ll give you an interesting perspective when seeing it up close. Warning: the touts out in front of these buildings can be as insistent and as aggressive as anywhere on the planet. Don’t fall prey to them.

As I mentioned it’s easy to get all these places in on one trip. If this is something you’re interested in I’ve put it together as a RTW trip. It’s below. If you like it, find out for yourself by using our thoroughly addicting TripPlanner application!