In 2014, I decided to ditch my life in California and try a new one as an expat. With no significant other, pets, house, or kids to worry about, I figured there’d never be an easier time to make such a big move. I had a burning desire to explore more of Latin America and perfect my Spanish.

Chile had been stuck in my mind since my teenage years because of a layover I had in Santiago flying from the US to Argentina. It was South American winter, and our flight for Buenos Aires crossed the Andes just as the sun was coming up. I can still remember plastering my face to window, awestruck by those sparkling, snow-capped peaks.

After a few months of research and saving, I realized there was no good reason for me not to take the chance and so I booked my one-way plane ticket to Santiago. Fast forward almost 3 years, and I’m still here, writing this article with a full view of the Andes right outside my apartment window.

So what are “the essentials” of a country that is about as long as the United States is wide? How can I summarize them when Chile includes the driest desert in the world up north, Patagonian glaciers in the south, and almost everything else in-between? Truth be told, even after years of living here and traveling the country more extensively than most Chileans, in no way do I feel capable listing the country’s “best spots.”  There are simply too many.

My number one recommendation (especially if your time is limited) is to try and pick 1-3 regions you are excited about and explore them thoroughly. Trying to “hit all the spots” from the north to the south is going to burn through a lot of precious travel time. In addition, Chile is one of the most expensive South American countries for travel, so limiting your geographic range will help you save on transportation.

All that being said, there are a number of excellent experiences you should definitely take advantage of during your time here, no matter what region you find yourself in. I’d say this list is fairly transferrable based on my travels. Even if you never set foot in Santiago, you won’t be missing out!

Surprisingly, pretty much every article I read online prior to moving here said that Chilean food was boring. I suppose if your definition of “exciting” means complex preparation and lots of spices, then sure, the food here may not be your cup of tea. But for me, Chilean cuisine’s simplicity, freshness and home-cooked feel hit the spot every time. Below are a few examples of my favorites:

Being raised in California, I assumed nothing would ever top the fruits and vegetables I grew up eating. Until that day I stepped in La Vega Central Market. Did you know you could buy a kilo of ripe strawberries for less than a dollar when they are in season? Or a kilo of avocados for $1.50? Not a week goes by where I don’t eat avocado toast. The fresh produce makes its way into the drinks too.

One of my favorite summer refreshers is a “melon con vino” – an entire honeydew melon, de-seeded, filled with chilled white wine and sweetened with sugar.

Speaking of, wine is plentiful and cheap here. I recommend trying Chile’s Carmenere. Besides being a very versatile wine enjoyed by fanatics and non-drinkers alike, Carmenere has a funny story. The grape was originally found in France, but it was thought to be extinct after a huge plague destroyed many European vineyards in the 17th century. Nearly 150 years later, it was re-discovered by a renowned wine expert who was visiting Chile. Chilean growers had kept it alive all that time, thinking it was a unique variety of merlot!

You can walk into a Chilean gas station store and find fresher bread than most grocery store bakeries have in the US. There are numerous varieties, the most common being marraqueta (sort of a smaller, softer baguette) and hallulla (a rich, round, dense white bread). If you eat out at typical Chilean restaurants, you will almost always be served some bread with pebre on the side (a mix of chopped tomatoes, onions, and cilantro, and peppers). If you’re a huge pumpkin fan like me, you should definitely try the sopaipillas. Sopaipillas are pumpkin fry bread that can be served either savory or sweet (the sweet version is called sopaipillas pasadas). 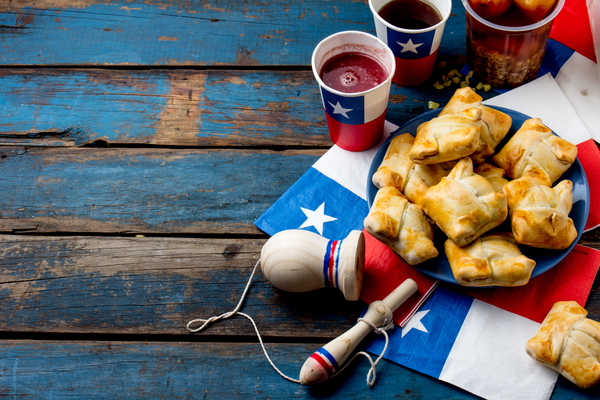 Empanadas are like savory stuffed pastries. The dough can be fried or baked on the outside, and it is always filled with something delicious. “Pino” is the most traditional empanada filling – slow cooked beef with onions, an olive and a hard-boiled egg. But you can find empanadas stuffed with almost anything on the savory spectrum. My personal favorite are seafood empanadas – especially if I’m getting them fresh from somewhere on the coast. 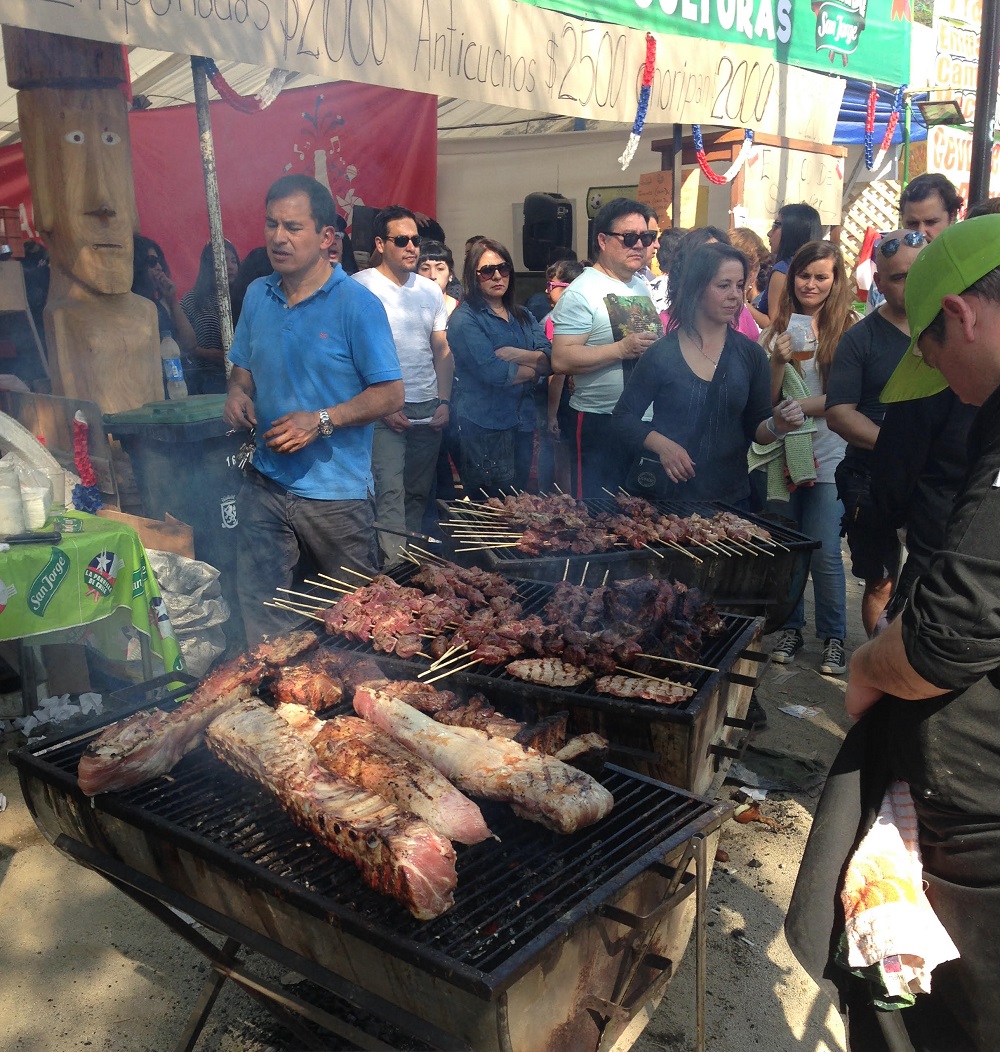 Chileans celebrate everything with an asado – birthdays, holidays, soccer matches, marriages, good weather. It’s a super casual affair, someone just gets a charcoal barbecue going and guests bring whatever they want to throw on there. If you’re not a big meat-eater, it’s totally ok to bring some other options you are comfortable eating instead. Whatever you do, don’t miss out on this cultural experience if it comes your way! 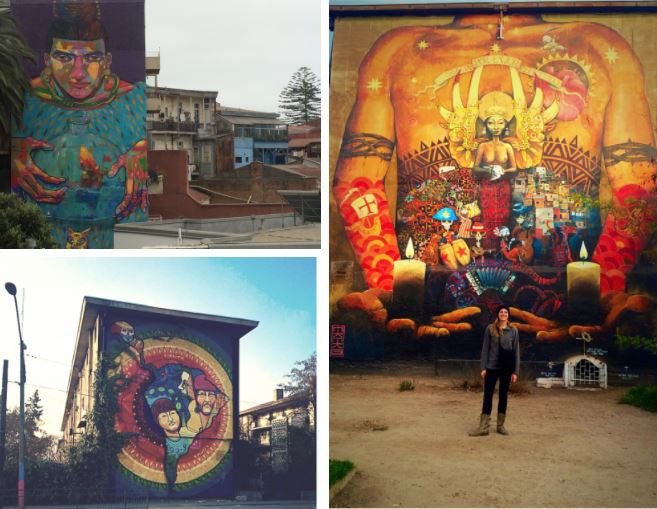 Street Art in Valparaiso and Santiago

Chile has to be the country with the most graffiti art I have ever seen. Of course, there are your typical urban murals like you would see in most major cities around the world. But even in the nicer neighborhoods of Santiago, you will find many houses and small businesses that commission artists to do a painting on their outside walls.

The city of Valparaiso, about two hours west of Santiago, is definitely the street art capital of the country. Every time I go I feel like I am wandering through a coloring book. 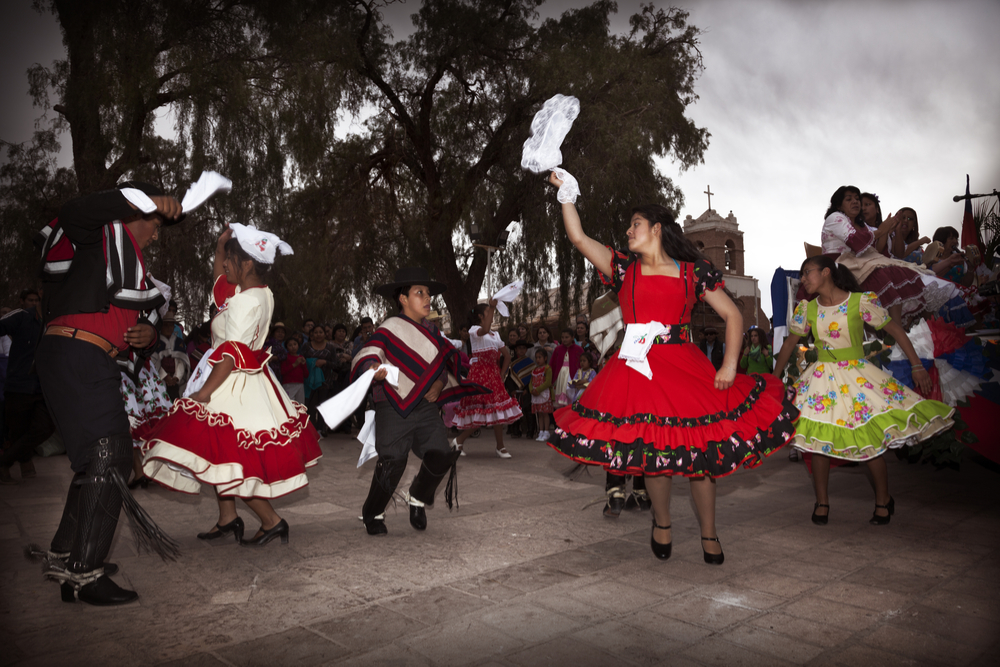 However for me, “street art” is not just limited to graffiti in Chile. There are plenty of musicians, circus arts performers, dancers, and artisans who post themselves on the public transportation and the streets in the cities. For example, on a corner near my apartment, there is usually a guy who fire juggles at a stoplight during the rush hour traffic. Another block down, you can find a couple that regularly performs the “cueca,” Chile’s national dance. It’s an interesting spectacle, performed in “wasso” attire (think Chilean cowboy for the man, traditional country dress for the woman). The dancers wave handkerchiefs in the air, while performing steps meant to imitate a rooster flirting with a hen. So even if you find yourself stuck in notorious Santiago traffic, you are sure to be entertained. 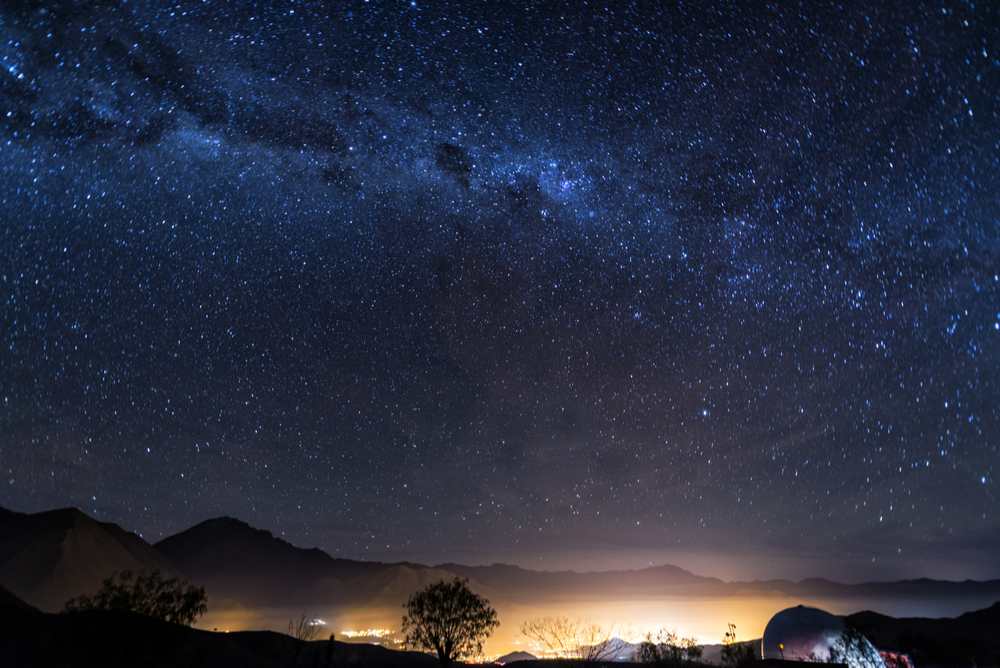 Once you’re out of the cities, Chile has some of the clearest skies in the world. One of my best memories is traveling to La Valle del Elqui (Elqui Valley) in the north of Chile. The Elqui Valley is especially popular for astro-enthusiasts because of a number of observatories in the area. But since my partner and I were on a super budget, we opted to just hike up one of the hills near our campsite and watch the sky without a telescope. To our delight, we were able to see more than a dozen shooting stars over the span of a few hours!

Head for the hills 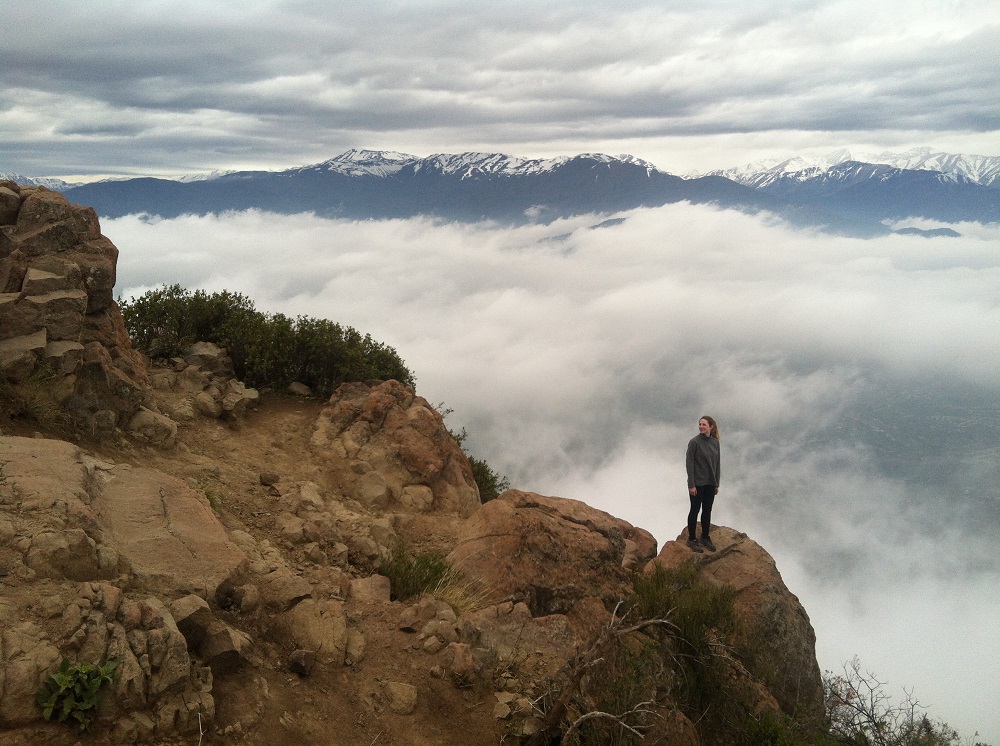 I think growing up in a country bordering the Andes gives Chileans a slightly different definition of a “cerro” (spanish for “hill”) than the average person. There are many major cerros near Santiago (Cerro El Plomo, for example), and they all look like giant mountains to me. However, they do make for great hiking, camping and photo ops.  And as you can imagine, during the winter skiing and snowboarding are quite popular.

Chile is also home to many volcanoes, both active and dormant. As a result, there are many natural “termas” (Spanish for hot springs) scattered throughout the country. Some of my favorites include Termas Geometricas in Villarrica National Park and Termas de Puritama in near San Pedro de Atacama. The perfect weekend in Chile for me would definitely include camping somewhere. You can easily have a wonderful weekend trekking, stargazing at night, and using Sunday to relax in some hot springs. Chile is home to some of the most breathtaking natural landscapes I have seen in my life, so take advantage while you are here! 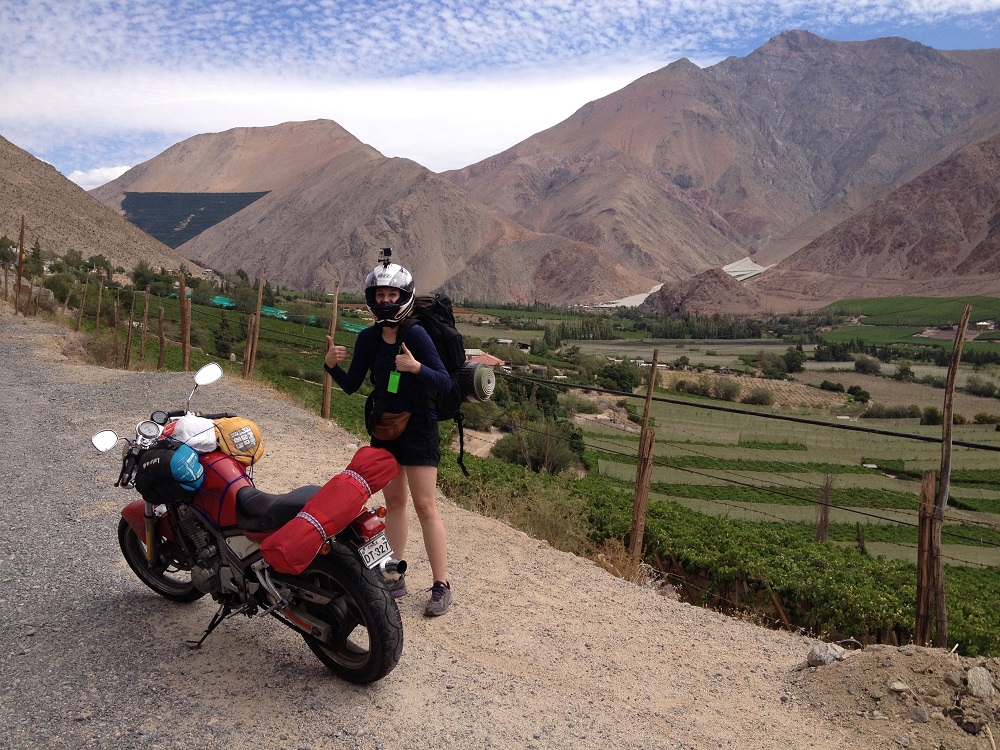 Whether your adventure is just a quick stop in Santiago or multi-day trekking in Patagonia, I encourage you to take your time in Chile and soak in the country. Things do move a bit slower down here, especially if you find yourself outside of the city, but that is all part of the beauty.

More articles on Chile by Airtreks: