Chris Wadsworth’s path to travel started back in 1996, when he decided to chase his passion for travel and take a trip around the world. After college, Chris had a desire to learn about different cultures and visit places that he had only read about in books. Like many of his clients, he didn’t know where to begin. He started by traveling around the world for 15 months. When he returned from that first RTW (round the world) trip, all he could think about was getting back on the road.

Coming off his first trek, he knew that he wanted to help others see the world and possibly have the same life changing experiences he had. In April of 2004,  Chris joined the Airtreks Team. Since being with Airtreks, Chris has taken several smaller trips throughout the years and now has a family with two young kids who are eager to get out and see new things. He’s living out his passion and loves encouraging and enabling others to do the same.

We had a chance to sit down with Chris to learn more about some of his adventures traveling around the world and returning home to help others do the same. Enjoy!

When did you take your first trip around the world? And where did you go?

My first trip around the world was in 1996. I started in London, and then went on to: Dublin, France, Spain, Italy, Thailand, Nepal, Laos, Cambodia Malaysia,  Singapore, Indonesia, Australia, New Zealand, and Fiji.

Tell a travel story of an experience that changed the way you thought?

Travel has definitely changed my perspective on life. Visiting new places and connecting with tons of people will do that to you. You also realize that there are so many things that we take for granted when you see how people in other cultures live their lives. I traveled with a cassette Walkman (I sound old, I know) and was listening to it in Nepal in the Himalayas. We stayed at a tea house with a family. The son, who was roughly 8 years old, could not figure out what I was doing with the wires in my ears. I let him listen and he could no figure out how the music came through the wire to his ears. He was blown away. He loved Fleetwood Mac and Dire Straights. Sharing that moment with him is something I’ll never forget.

Also, in Laos, they only allowed tourism again for four years before we got there. We went to very remote parts, and the Laoations had not seen many people like us before. They were as interested as us as we were of them.

What was one of the craziest experiences you had while traveling?

Swimming with humpback whales when they were migrating through smaller Polynesian Islands off of Tonga called Vava’u. I flew into Tongatapu and then took a boat to one of the smaller islands that two New Zealanders rented from the King of Tonga for 99 years.

I watched the whales breach while I was having breakfast, and then took a boat out to follow the whales around. When the whales swam up to the boat, we knew it was okay to jump in and swim with them. It’s a little frightening at first, because you’re right on top of the whales. They tilted their heads and came up to the surface of the water and were just 20 feet away from us! Swimming next to these beautiful giants made me realize just how small I am in this world. Most memorable experience for me, hands down.

Was there an influential person you met along your travels?

The Buddhist Monks. It was incredible to be around the monks. They taught me how to find true peace in life and that’s something I’ve kept with me forever since meeting them. 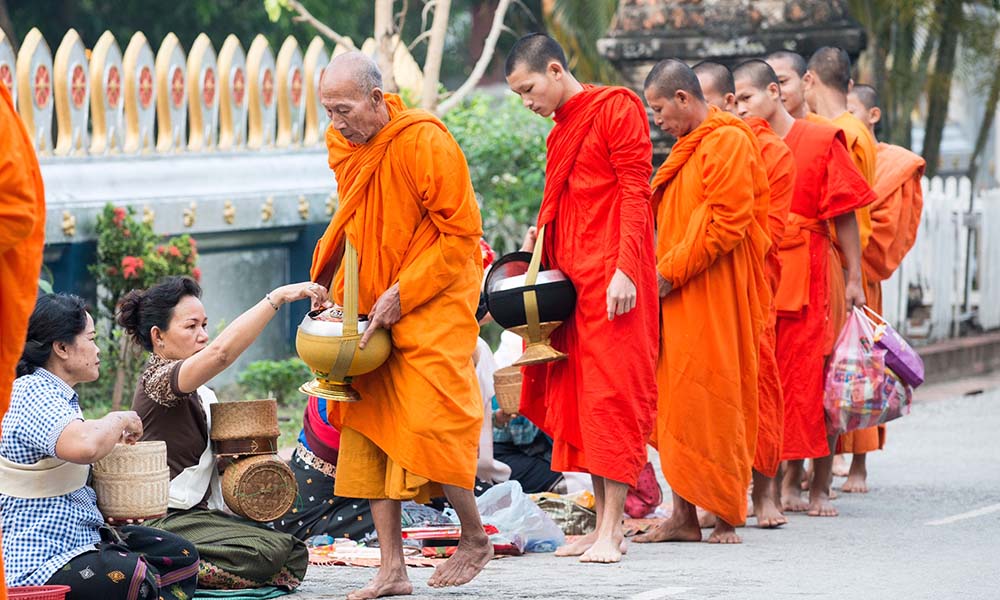 Why should someone take an around the world trip?

Travel gives you a fresh  perspective on life and allows you to gain enriching, life changing experience. Through travel, you see and feel cultures that you could not grasp from books or movies. The smells and tastes of different food and places cannot be had in any other way. Take a chance on something great for yourself, and take a trek around the world.

Loved this? Let’s talk about how travel has changed over the past 20 years!

Chris was an AirTreks Travel Planner for 15 years. Want to build a trip around the world like Chris did?  Start planning your long-term trip now