Buenos Aires ranks high on travelers’ to do list while traveling through South America. It’s not hard to see why: a favorable exchange rate, great food, and 24 hour nightlife attracts visitors of all ages, and with the city emerging as an art and cultural hub of the continent, here are some travel tips to one of the most interesting cities in the world.

A port city founded on the banks of the Rio De La Plata, the residents of Buenos Aires are known as porteños. Less than 200 years old, the city’s roots are in tiny La Boca, where the great ships from Europe arrived with immigrants from Spain and Italy.

From its humble beginnings, Buenos Aires quickly grew in size, and with money from agricultural products grown on the nearby Pampas, an immense urban planning scheme commenced which resulted in a metropolis of stunning architecture.  With over 14 million inhabitants, the city today is Argentina’s political capital and the center for artists, writers, painters and musicians.

While the city is best known through a short list of stereotypes (Evita, steak, and tango) there is much more to Buenos Aires than this. Porteños are talkative and expressive, and few cities anywhere can boast such an eclectic atmosphere as Buenos Aires, with numerous galleries, colorful street art and impromptu musical performances put on for porteños year round.

And while it may seem daunting at first – what with the traffic, the noise, and the crowds – it is best to allow some extra time to get to know BA on foot, as this fascinating, multi layered city will quickly get under your skin.

Private taxis from the Ministro Pistarini International airport to anywhere in the city center will cost 115 pesos (about 28 USD) Tienda De Leon run buses to the Microcentro area of Buenos Aires and the Jorge Newberry domestic airport for 45 pesos (about 11 USD). The SUBTE is an efficient way to avoid traffic jams, and only costs 1.10 pesos (about 27 cents a ride). It best serves the neighborhoods of San Telmo, Recoleta, and northern Palermo.

Taxis are everywhere in BA and can be recognized by their yellow and black markings. Always take official radio taxis and make note of the number in case of trouble.

Public buses crisscross the city but can be daunting to figure out for the casual visitor. Fares vary according to the bus company and you must know your destination when you board, as the bus driver will inform you of the correct fare. No paper money is accepted. The GuiaT is a bus guide that costs 6 pesos (1.50 USD) and covers all the major bus lines.

Despite the cracked pavements and pollution, Buenos Aires is a fantastic walking city, and exploring the different neighborhoods is a great way to discover hidden restaurants, parks and gardens.

Palermo Soho, Palermo Hollywood, San Telmo and Barrio Norte are the most popular neighborhoods for hotels in BA. Each neighborhood has a different vibe, and character, giving visitors a chance to match their hotel with their interests:

San Telmo is for tango, and cobble stoned streets.

Barrio Norte is more suited for business travelers and those OK with urban traffic noise.

Palermo Hollywood is a throwback to what the barrio of old Palermo felt like.

Palermo Soho has become the city’s center for art galleries, fashion stores and up market restaurants.

Opened in March 2010, the property has 17 rooms and rooftop pool with view over Palermo. Located on Uriarte street in Palermo and remains a way under the radar at the moment so stay here now before it gets heavily booked out far in advance. The hotel will open Peruvian restaurant onsite in late 2010.

Well situated in Barrio Norte facing the Plaza de Rodriguez Pena and convenient to the SUBTE and central business district. Rooms feature floor to ceiling windows and free Wi Fi. Love bacon and eggs at midnight and don’t want to wait till sunrise? Stay here! Breakfast is served in lobby 24/7. Will open a sister property in the future, with the same concept.

1 block from Plaza Dorrego, and located within a historic building. Rooftop pool and free wine tastings every night for guests. Rooms are individually decorated and named, and surround an atrium beneath an antique glass ceiling made of Vitraux glass, from which the hotel gets its name.

Situated in Palermo Hollywood, this hotel has a variety of rooms and a stunning outdoor garden that surrounds a large swimming pool. The property closes each year to refurbish, meaning rooms are freshly painted with new carpeting, etc.

Nuss, 5411, and Ultra all in Palermo Soho with on-site restaurants and free Wi Fi. All have less than 15 rooms and are all independent, non-chain hotels.

Weekly rentals for apartments can be a good value for a family or couple staying for a week or more. Equipped with kitchens, Wi Fi and more, these units fluctuate dramatically in cost between the high season (December to March) and low season (the rest of the year).

There are thousands of restaurants in Buenos Aires, and portenos love to eat out. They also love to dine late: Only tourists will be seen tucking into steaks at 7 PM, and if you are invited out to dinner, be prepared to sit down at 11 PM or even later.

Most main dishes like Bife De Chorizo or Bife de Lomo run around 50 pesos (13 USD) at mid market establishments, with pizzas for two running about 30 pesos (7 USD).  Bottles of wine cost about 35 pesos (8 USD) and up. Below are a few of the best options:

Miranda  – located in Palermo Hollywood, this restaurant is a lunch favourite for business men and recently celebrated its 6th anniversary. Try the Ensalata Jacinta, made with organic greens. Their dessert menu is awesome.

La Cabrera – a 50% local and tourist crowd mingles here to taste some of BA’s best steaks. Free champagne served while you wait for a table.

El Quardito – some of BA’s best pizzas are served here in a hole in the wall establishment frequented by taxi drivers and local celebrities. Try the fugazetta cebolla (cheese and onion)pizza.

Minga – it may look touristy on the outside but this restaurant has excellent steaks and salads right off of Palermo Viejo square.

La Cupertina –awesome empanadas straight from the oven and made with the family’s antique recipes.

Aside from the obvious visit to the Casa Rosada, where Eva Peron spoke, and the Recoleta cemetery, where she is buried, walking around Buenos Aires’ is essential to get the best feel for the city.

Teatro Colon – recently renovated, and seen as one of the top three opera houses in the world, performances are now given nightly

Plaza Libertador – great view over the river towards Uruguay

Tierra Santa – the world’s only religious theme park, has to be seen to be believed

Though generally a safe city, Buenos Aires is like any world metropolis where it pays to keep your eyes open, particularly at night.

Be aware of the dirty water/mustard trick, where a couple working together first squirts you with an offensive substance, kindly offers to help you clean it off, then walks off with your wallet.

Motorbike thieves are becoming more common, and drive by at high speed to snatch cameras and backpacks. Always look carefully when you walk across intersections and carry valuables tucked inside. 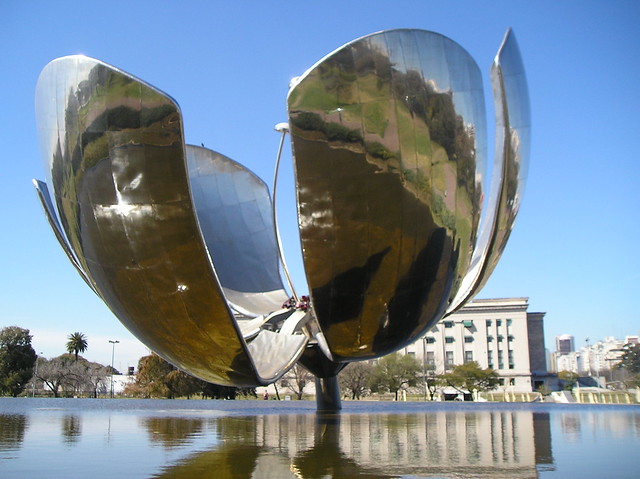 The Floralis Generica, in the United Nations Park reflecting pond

Things to Look Out For

Buenos Aires is a fantastic walking city, and strapping on a pair of walking shoes and taking off in any direction will reward you with stunning architecture, endless people watching, and more. Here are some highlights of what to look out for:

Stencilos: All over the city graffiti messages have been sprayed on walls to spread social and political messages, or just to amuse passerbys

Fileteado: with roots in Italy, this ornate painting is used to decorate buses, restaurants and more

Mate: A kind of tea drunk all over Latin America, mate is a form of social bonding popular among students

Empanadas: originally brought over from Spain, empanadas are popular snacks served at neighborhood outlets equipped with wood fired ovens. Varieties include jam and cheese, onion and ham, and Roquefort cheese

Alfajors: two crumbly cooked slapped on either side of a thick layer of dulce de leche, alfajors are delicious snacks served with coffee

Gelato: Try an ice cream at Freddo or Volta, both of which have outlets all over the city.

Trying the Tango under the stars in the Barracas De Belgrano;

Exploring the Stencilo wall art with a graffittimundo walking tour;

Learn a bit of Lunfardo, a slangy street language that was invented in Buenos Aires

This is a guest post by Dave Lowe, travel writer and AirTreks Personal Travel Consultant. You can find more of his writing on his blog at www.TheLoweRoad.com. If you would like to guest post on the AirTreks Travel Blog feel free to take a look at our submissions page.