A mere hour flight from both Bangkok and Saigon is Cambodia’s jewel, the Angkor Archaeological Area, home to more than 100 readily accessible ancient temples each with their own brand of mossy identity. Its main draw, Angkor Wat, sits 20 minutes north of the town of Siem Reap in central Cambodia, with a full service commercial airport giving full access to the region. Most of the archeological sites in this area are surprisingly well-preserved, given their age, and set a beautiful invitation to discover the history of the Khmer people of South East Asia, an empire that dominated the region for 600 years starting in the 9th century.

Inexpensive airfare to Siem Reap can be picked up either ahead of time or last minute if that happens to be your style. From the west, the city is served by Bangkok Airways – from the east, by Vietnam Airlines. Or if you’re of a more steadfast persuasion you can arrive by bus, which can be a long, bumpy endeavor not for the faint of heart. 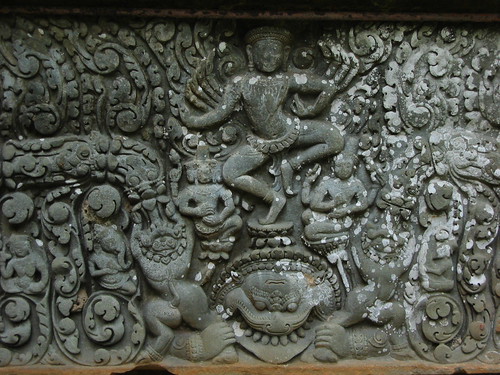 There’s plenty of accommodation choices in Siem Reap for absolutely any budget. Some of the cheapest places on earth to sleep and eat are here, considering that Cambodia sits 7th lowest in gross domestic product of all the 33 Asian countries. In other words you don’t have to spend much for a comfortable stay. Guesthouses, hotels and hostels are on the rise in terms of quality and accoutrements and can be found on the fly or ahead of time with a little internet research. Over the last few years Ankgor Wat’s fresh notoriety brought with it many more options to accommodate the new interest in the area and the building continues to this day. Bring your US dollars as they’re more widely accepted than even Cambodia’s national currency, the riel.

On your temple day, pick a 1-, 3- or 7-day pass (US$20, $40, $70 respectively). You’ll be able to get them on the main road to the Angkor temple neighborhood – you can’t miss the checkpoint. A 3-day pass may be your best option depending on how much time you want to devote to exploring the ruins. Be sure to have it on you at all times as officials will check them at each site. With a longer pass you’ll be able to stretch out and slowly revel in the drama of each fascinating site.

Angkor Wat should be your place to start.

It’s the most well-known and highly regarded of the region’s ancient enclaves – in 2007 made the short list for the New 7 Wonders of the World.So important is this complex to the national identity and economy that the Cambodian government has made sure its towers would forever grace both the currency and flag. Consider renting a guide (US$20) for at least one of the days touring the ruins. They can be essential in helping you engage with the area’s history and geography. Not to mention that local guides are extremely proud of what they do. It’s a huge achievement for a local to get to wear the badge of official Angkor guide.

Angkor Wat’s architecture hails from the 12th century but remains standing in excellent, if rustic, condition. Declared a UNESCO World Heritage Site in 1992, the Wat was finally pulled from endangerment in ’86 when renovations began to make the site available to visitors. Interestingly, Hinduism (not Buddhism) is the defining religious aspect of the temple, and there are at least half a kilometer of scenes from the Hindu epics Ramayana and Mahabharata depicted in bas relief along the walls. But please do not touch. Please!

Of course with fame comes fame-seekers and there will be tourists, especially at Angkor Wat during peak travel season. But it’s strangely easy to forget the crowds at Angkor Wat. Something magical allows for your enchantment to remain undiminished by mere crowds.

Take your time to discover Angkor Wat but be sure to leave time to see the other sites around, if only to escape other tourists.

Bayon, with its 54 towers and 216 tranquil faces is the centerpiece of Angkor Thom, an ancient gated-community enclosed in a square with four beautifully ornate entrances. During its peak in the 14th century, Angkor Thom is believed to have been home to 150,000 citizens.

A few other sites of the Angkor area worth a visit are: 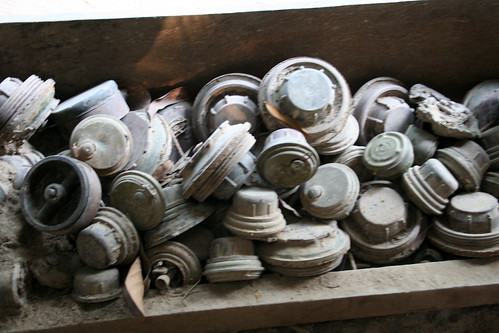 Disarmed land mines at the Land Mine Museum

Plan ahead with the sites you’re interested in seeing as some of the distances between them can be large. Hire a tuk-tuk (a sort of motorbike rickshaw) in town the night before for a breezy day-long chauffeur to each place. Forget the organized tours and watch out if you’re on a bicycle, the road can be busy, muddy and temperatures can get hot during the day. If you’re on a bike drink lots of water!

The peak of Cambodia’s rainy season is July to September when it can rain 2 out of 3 days but as the rain falls in short bursts it’s not likely to hinder your enjoyment of this fascinating area.