Round-trip plane ticket? Easy. So straightforward, your cat can do it, and may have when your back was turned.

But booking a multi-city ticket becomes a little more complicated. Not to mention a lot more expensive. Take Philadelphia to Charlotte, for example. A sample fare can start at $250 with some advance notice. But what if you decide you’d like to visit Miami Beach, too? The price starts ballooning.

I ran into a multi-city dilemma a while back.  As a travel blogger who also does her regular journalism job from home, I felt suffocated by my hoodie (my official work outfit), my dachshund, and the deadlines. I wanted to get away not only to another place, but to another time.

I decided to whisk myself away aboard the Eastern & Oriental Express, sumptuous sister to the fabled European train. I was ready for some adventure on the rails. I would be journeying from Singapore to Bangkok, Thailand — roughly the distance between Manhattan and Miami Beach. Three days and two nights. In my own private cabin. With a steward. La-di-da.

Since I’d be in that part of the world, thought I’d also check out Ho Chi Minh City in Vietnam, which I knew as Saigon growing up during the Vietnam War. I was curious to see what it was like nearly 40 years later, still under communism.

Here’s how I put it my round-the-world trip together.

I needed to get from my home in Pennsylvania to Singapore. My budget allowed a couple days there before boarding the train to Bangkok. Since I’d heard so much about Bangkok and had never been, I allotted a little more time there. On to Vietnam for a quick look. Then back to Pennsylvania.

I started researching online and found the cheapest one-way fares I could have pieced together from city to city on random airlines would have cost me roughly $2,500.

My schedule was especially tight because I couldn’t afford to take much time off from work. I planned on working as usual. That meant  I had to coordinate my schedule to Pennsylvania time, no matter where I was on my trip. So I stopped right there and turned once again to AirTreks. I discovered them online a few years ago, when I was trying to plan a migraine-inducing, round-the-world trip on my own. They came through with a fare that was reasonable, and most importantly, hassle-free.

Because the ticket was basically a bunch of one-way fares strung together,  I wasn’t bound by rules that come with traditional round-the-world tickets. Meaning I could fly in any direction I pleased. With no restrictions.

Once again, AirTreks delivered. My trip to Asia and back cost $1,800, with basic flight insurance included. The schedule was right on, and the fare was a good $600 cheaper than what I’d found on my own. And even at that price, the airlines were nothing to sneer at.

OK, there’s a catch. I’ll be going to and from Asia by way of the Middle East with layovers in Dubai. As in, an eight-hour stop on the way there. I’m actually fine with it because the economy flights on Emirates Airlines are, in a word, fantabulous. 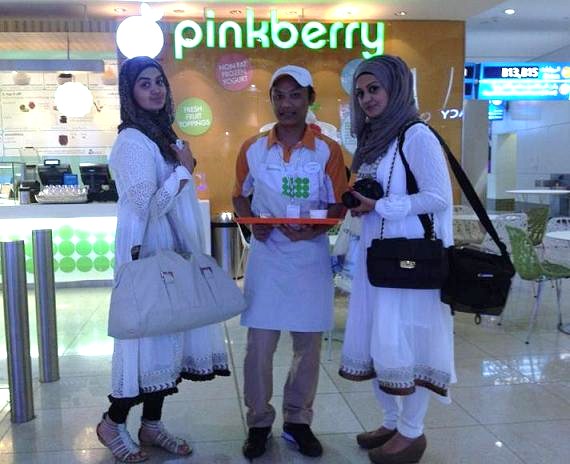 At Dubai airport, I get a manicure, savor dynamite Middle Eastern food in the middle of the night, and do a lot of window-shopping. 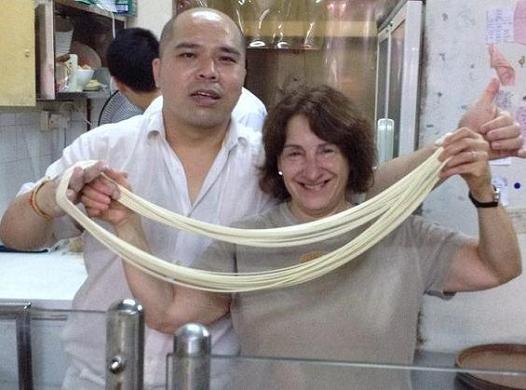 Here I am playing with my food in Singapore’s sizzling Chinatown.

I feel compelled to stop at the iconic Raffles Hotel, where the Singapore Sling supposedly was invented. Nice place, but the drink doesn’t do much for this chocoholic. 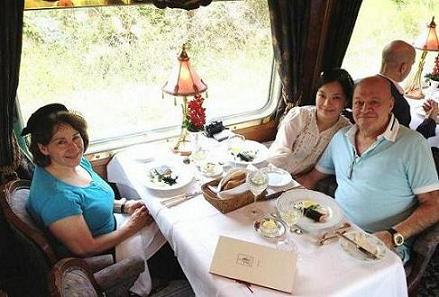 On to the Eastern & Oriental Express, my five-star hotel on wheels. That’s me in the hat, trying to make like Agatha Christie. Since there’s no Internet, I take off work. My only responsibility is showing up on time for meals. With food that good, no problem.

The train ride is a luxurious but fleeting introduction to Malaysia and Thailand.

With a stop on the real Bridge on the River Kwai.

Last stop: Bangkok, where, after all the pampering, re-entry into the real world is a downer. But the awesome bathroom view from my rented condo helps some.

Have a blast at the Chatuchak weekend market, a big local hangout 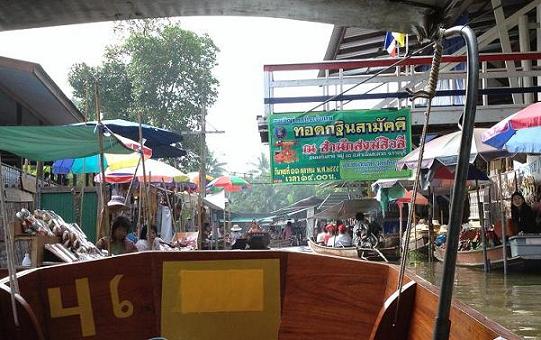 Another market is all wet: too touristy, but still something you don’t see everyday. 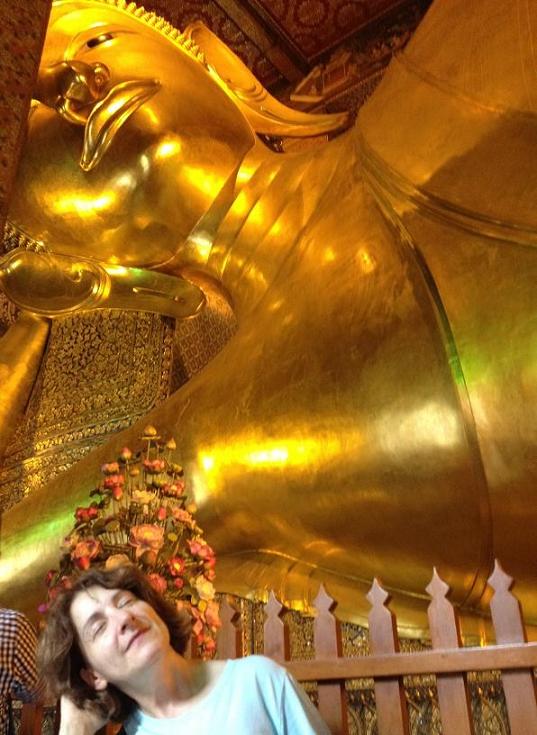 The reclining Buddha is also in the heart of tourist central. But since Murray Head dissed it in “One Night in Bangkok”, I’ve just gotta see it.

Fly Turkish Airlines to Ho Chi Minh City, Vietnam. Here’s my souvenir from that quick flight — a nifty box full of flight necessities like toothbrush and socks. No doubt left over from a longer trip. Campy, like a school lunch box.

Ho Chi Minh City is still called Saigon after all these decades. Like the vibrant city, the young professional couple I’m renting a room from are up on the latest everything.

The Vietnam War museum is an eerie sight, especially for an American. It’s surreal being a spectator in this place where the bogeyman is the United States. But this is communist Vietnam, after all, and this is that nation’s view of the Vietnam War.

Back home on Emirates again, with a much shorter stop in Dubai this time. The adventure is just enough to whet my appetite for a bigger taste of Southeast Asia someday. Thanks again, AirTreks.

* All photos courtesy of the author
_________________________________
Laura Lippstone is a seasoned journalist who’s been on the go since Pan Am was a real airline. Since she’s not exactly Kobe Bryant, she’s a master at traveling light. She moved to Australia with just one suitcase, and now spans the globe with a big purse (her cute little Vera Bradley carry-on) and laptop. To find out how she does it, head over to planetlippstone.com.