The small Canary Island of Lanzarote is just a two and a half hour flight away from mainland Spain. But as your plane circles above the island before coming in to land at Arrecife airport you could be forgiven for thinking that you’ve been transported to another planet, as the island boasts the most surreal volcanic scenery – forged in the heat of some of the biggest eruptions ever recorded. 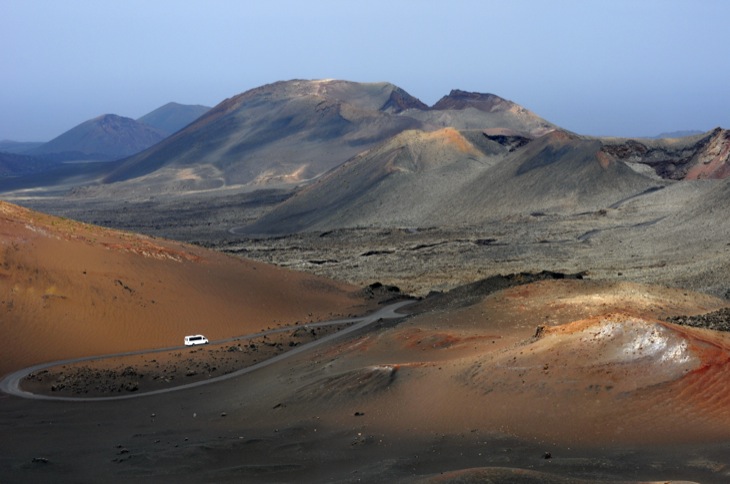 Lanzarote is located just off the coast of North West Africa and while it is part of both Spain and the EU, it’s worlds away from the green and verdant scenery of the Iberian Peninsula.

A desert island in the truest sense, Lanzarote is almost totally denuded of trees and plants. It lacks any natural water sources or springs and is rarely troubled by rainfall, a major plus point for sun starved tourists but a giant headache for the locals who have had to resort to some truly ingenious methods of dry cultivation over the centuries.

During the 1730s, this delicate eco-system was further disturbed by massive volcanic eruptions. These lasted for over six years and irrevocably transformed the terrain, covering about one quarter of the total land mass of Lanzarote in an impenetrable carpet of solidified black lava, punctuated at regular intervals by the spent peaks of now dormant volcanoes.

These cataclysmic events caused widespread chaos at the time, forcing many Lanzaroteños to abandon the island altogether. Fast forward a few centuries and these landscapes have now become one of the greatest assets of Lanzarote. There are few other locations on the planet that can boast such pristine and perfectly preserved examples of volcanic scenery on such an awe-inspiringly grand scale.

The Timanfaya National Park lies at the central hub of these eruptions and is, by some distance, the most popular visitor attraction on the island. Every year, close to one million tourists take guided coach tours through the twisted terrain, before decamping to the El Diablo Restaurant to enjoy food cooked over the geo-thermal heat of a dormant volcano on giant grills.

So dramatic is the scenery in this part of the island that scores of film crews and photographers have used Timanfaya as a backdrop. From the sci-fi classic One Million Years BC to more modern productions such as Broken Embraces, Pedro Almódovar’s recent production starring Penelope Cruz.

Of course, Lanzarote offers many other more traditional attractions and sights such as beautiful beaches and picturesque white washed villages. But the influence of the eruptions is inescapable and evident everywhere, from the farmers fields covered in black volcanic chippings, called picon (used to mulch their crops) through to the colors and textures that echo the surrounding lava fields which have been incorporated into the canvases of César Manrique, the famous artist and Lanzarote’s favorite son.

Nick Ball is a keen traveler and writer and blogs for the leading island rentals site Holiday Villas in Lanzarote.