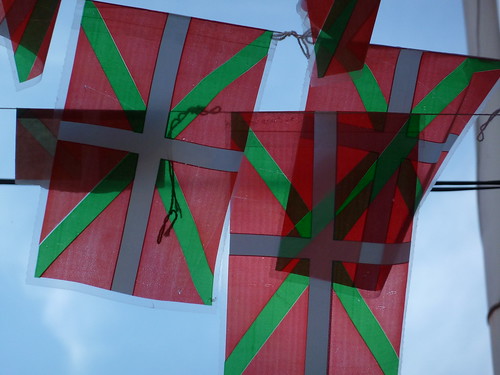 The Basque region of Spain is part of the Spanish state, but it can be like entering a separate country. It even has its own language – Euskara – which is unlike any other: part Visgoth, part Celt, part Vulcan. Many linguists regard it as the most difficult in the world.

This isn’t an obscure tongue whispered in back rooms, but it was under the repressive Franco regime in the mid 19th century. Since Franco’s death in 1975, the Basque region has been granted considerable autonomy. Euskara is taught in schools, dubbed in movies, spoken on television, and is the official government language.

If you know some Spanish, you’ll get by well in Basque country. My high school Spanish was beyond rusty. Tourism in there remains modest, so don’t expect the proud and somewhat insular people to speak English.

We rented a car to tour the area and having to make fast navigating decisions using long, esoteric street names tucked away on the sides of buildings is…let’s say, challenging. We were in Bilboa, metro population 875,000. We wanted to go to Durango, a town of 25,000 only 20 miles away.

Yes! A sign pointing to Durango. But that’s the last one we saw. After traveling through a dozen turning decisions without so much as a hint and ending up going the wrong way on a one way street, we were rescued by local police who were kind enough to provide an escort to the right highway (without a ticket). They spoke no English.

Even in Bilbao, boasting the world-renowned Guggenheim Modern Art Museum, there are few signs pointing the driver to that major tourist destination. Finally, after circling around for an hour, we hailed a taxi and communicated through sign language: Drive to the museum while we follow in our car and we’ll pay you when we get there. I did manage to say muy lento, por favor (very slowly, please) in Spanish, and we crept on our way. For the Guggenheim, any frustration is worth a visit.

Once in the countryside, driving is easier. Not to be missed is the Balenciaga Museum recently opened by Queen of Spain in Geteria, about half an hour from Bilbao. Cristobal Balenciaga is one of the most acclaimed fashion designers of the 20th century, known for his haute couture to royalty, both inherited and Hollywood-anointed.

On the way, as a complete surprise, we came across the town of Gurenkia (Guernica), made famous by the Picasso painting depicting the devastating 1937 Nazi bombing of this Basque region during the Spanish Civil War. The museum is both dramatic and eerie.

San Sebastian, a costal city of 185,000 nestled on the Bay of Biscay, is called the most beautiful beach in Spain. Here, they speak English…and French. The French practically take over the city in the summertime. A friend of mine (from the U.S.) had his wedding and honeymoon in San Sebastian.

It’s cosmopolitan, a scenic delight, and expensive, even in off-season. Everything – from taxis to cough drops – costs more in San Sebastian. A recommendation where to stay: Pension Bellas Artres.

In most of Spain, it’s tapas (appetizer-like treats); in the Basque Country, it’s pinchos, which have their own regional flavors. Think of them as tapas with toothpicks (pinchos is Spanish for spike). When you go to a bar or restaurant, pinchos (as with tapas), are commonly laid out. Pinchos may come with a charge that is calculated by counting your toothpicks. It works on the honor system.