It’s easy to equate traveling around the world with following a series of connect-the-dots points on a map, and not necessarily with overland travel. This assumption is obvious since it’s the cities that, after all, have the airports.

But the problem is that by flying from city to city you miss out on some of the best parts of the travel experience, seeing the things that exist between them. Granted, the farther from the city center you get, the less access you’ll have to those things that make you feel most at home (comfy hotels, Internet cafés, Starbucks double-tall nonfat lattes) but after traveling awhile you understand that not having these things is what you’re actually traveling for. 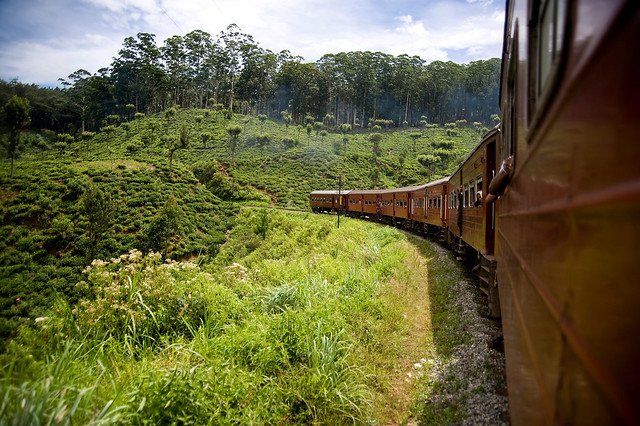 Away from the bustle of urban culture you’re allowed a keen glimpse of the lifestyle (aka, the soul) of the country you happen to be in. Rural life allows escape from the homogenizing aspects of corporate culture: advertising, commercialism, Starbucks double-tall nonfat lattes, all the things that taint the pure nature of the traveling experience, thus allowing you a more intimate exposure to the country’s people, its traditions and national culture.

Cities provide the shelter of anonymity, which is often very comforting, if not downright essential, but it also insulates you from the true nature of the country you’re visiting; there tend to be a lot of very Western influences in countries that are decidedly not western.

The good part about an AirTreks ticket is that you don’t have to fly between every city on your itinerary. Train and bus travel are fantastic ways to get between travel points, and highly recommended. A good resource for train travel around the world, albeit rather UK-centric, is Seat61.com

Here’s our list of easy, affordable and efficient legs to travel on your own (starting East and going West):

Between Auckland and Christchurch, New Zealand

It’s about an 8-hour drive (not counting the ferry) between these two cities and also where much of the true natural beauty of New Zealand lies. If you’ve never RVed before this may be your time to start!

Don’t try to tackle too much overland in Australia unless you have a ton of time—the distances can be huge and time-consuming. The distance between Sydney and Perth is over 2000 miles, or roughly the distance between New York and Phoenix, Arizona. It’s a long, empty drive. You might also be interested in training up to Cairns, but be wary of the extra 850 miles after Brisbane.

Between Singapore and Bangkok

There’s a wealth of comfortable and cheap train travel options between the various cities and towns along the Malay Peninsula and fares are inexpensive.

Take the “Reunification Express” between them. At $52 for a sleeper or $30 for a nonsleeper, you’d be crazy not to. And you can exit at any of the 10 train stops along the way (just buy separate tickets).

Between Hong Kong and Shanghai or Shanghai and Beijing

The Chinese have their own version of the bullet train and you can cover the distances quickly. Fares can be had for under $100. Not to mention your attempts at deciphering hanzi can be an intriguing and fun experience! (Don’t forget your visa.)

The Indian rail system employs over a million people, giving reason to believe they have things under control in that department. Be warned that the pace of overland travel in India is different from nearly everywhere else, so give yourself time to get around the subcontinent.

Between Nairobi and Johannesburg or Cape Town

Not surprisingly, this route can be time-consuming and frustrating to even the savviest traveler, but in the end it’s a highly satisfying journey. Give yourself plenty of time and practice patience. Bus it from Nairobi to Dar es Salaam then trains will connect every major city along the southeast African coast.

In the Middle East

It is possible to travel overland between Cairo and points north (Tel Aviv, Amman). If going to Lebanon or Syria be very careful with Israeli passport “stamp stigma” as passing through overland borders will get you stamped. Certain countries will not allow entry if you have an Israeli stamp.

Seriously, you need a good argument not to. One of the best reasons for training it through Europe is that their network is one of the world’s most comprehensive, modern and reliable. Not to mention that most rail stations in Europe are smack in the city-center saving that costly taxi or train out to the airport, plus the time saved by not waiting at security checkpoints or on the tarmac. The only downside is that it can be expensive and the fares add up since you’ll want to visit every city on the continent. Buy one of the many variations of railpass and save. Watch out for long overnight trips as the novelty of train travel washes off after 9 or 10 hours in a compartment.

Between Rio and Sao Paulo

Bus service is frequent and efficient and will get you to a new Brazilian city in 3 hours.

Between Buenos Aires and Montevideo

There is a 3-hour ferry that sails across Rio de la Plata. Take it!

Between Santiago and Mendoza

Rent a car. The drive 3-hour drive through the mountains is an experience you will never forget.

Between Los Angeles and San Francisco

Again, rent a car and drive up the 1. It’s one of the world’s most spectacular coastlines.

Train between New York and Philly or Washington D.C.

You get to go through Grand Central Station, enough said. Of course there are many other choices for overland travel (ie, Central America) but it’s up to you. Just let deviations be a part of the act, because straight shots are just boring! Balancing the amount of time for your trip in total with the amount spent traveling between cities on your own is an important thing to consider when planning your around the world trip.

Our TripPlanner application allows you to add overland travel legs to your RTW trip very easily. You may also want to see our updated list of 14 fantastic overland travel routes!

» Price your around-the-world trip with TripPlanner

Don’t forget, the most authentic view of the many peoples and cultures of this great world is found by way of its indigenous residents.

What legs of a trip would you recommend for overland travel? Let us know in the comments.