When I visited the sleepy seaside town on the Croatian Istrian Peninsula called Rovinj (pronounced Roh-VEEN) my impression was – and not to undersell it – it hasn’t changed a bit.

Extending out into the Adriatic like a red-tiled thumb, Rovinj, Croatia and its old town sits on a rock at the most northwesterly corner of Croatia’s sickle, tempting cameras and romancing couples to breathe it in. But even with its postcard quality, Rovinj still likes fishing boats more than yachts, apartments more than hotels, and hard work more than “me first” leisure.

Its community is very present and genuinely salt-of-the-earth. 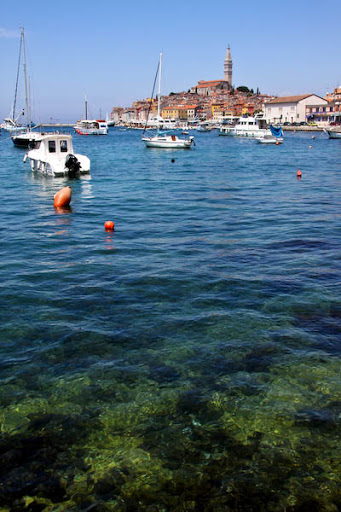 Still, Rovinj seems tailor-made for people who love tourist hotspots like Venice and Dubrovnik, and the stalls selling fridge magnets and beach towels would lead you to believe it, but as if to directly contradict that perception, we dined on perfect sea-fresh fish, delicious beef dishes prepared with care and chatted with locals who were totally unconcerned about any tourist reputation. People seem to have sidestepped those concerns by being simply who they are, very much true to their city’s deep roots.

Don’t get me wrong, Rovinj is popular with visitors, and its name can be found in more and more guidebooks as the months go by, but the odd lack of tourist buses waiting in the wings will tell you otherwise.

Either way, there’s plenty to do (mountain biking, beach comas, rock climbing, boat excursions, dreaming wistfully about your potential Adriatic heritage) and you will feel like it was heaven-sent just for you.

The town itself was an island until 1763 when some industrious souls decided to link it with the mainland. But the town actually dates back to the 3rd century when Illyrian tribes settled there, later taking on the flourishes of Venice when it became part of its Republic in 1283.

But its history and age are a mere grace note to the hours you spend there. More importantly, it’s the atmosphere that fills your lungs. A stroll through the old town’s steep streets, peeking into artists’ studios, browsing the little outdoor market – pick up a bottle of grappa or a bag of walnuts or pears to  make a local’s morning – it all seems so utterly charming and safe you don’t know whether to sing or lay down and die. Perhaps the photos you take will convey a town with the sensibility to put its most historic relic, the tiny Batana boat, on wheels next to the main square as an effort not to be kitschy but honest, and it’s as real as it gets. 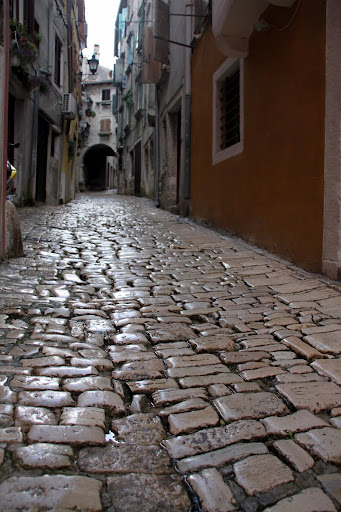 Up on the hill, St. Euphemia Church is the town’s cake topper. The weathervane at its pinnacle directs the storm clouds like an old conductor, telling them just when to launch into their symphony of thunder and rain. You can climb the wooden staircase inside, popping out onto the observation deck wondering how the thing remains standing after all these years. There’s a staircase to the bells, but please try to obey the sign, “Do not ring the bells”.

Yes, it’s odd that Rovinj still isn’t on the American tourist map. You’d think they’d be coming in droves, as close as it is to Venice (60 miles across the north Adriatic). But not so much. That languid American drawl is very sparsely heard. But even though Rovinj (and Croatia) has been a destination for Europeans for quite some time, especially for German middle-agers in the summer months, they’re easy to avoid – look for the 15 pairs of khaki Capris and go the other way. Or just visit in April.

There will be beds to keep you and local restaurants to stumble into. Sit down, start up a conversation with the proprietress about the weather or the day’s catch and order the first thing on the menu. If you can, do something goofy before the food arrives, like a quick samba to the pop music blasting from the radio and you’ll get the cook, probably the proprietress’ Dad, laughing and on your side.

So you’ll probably fall in love with the 16 year old St. Euphemia and the creaky charm of Rovinj. Say hi to Latka and splash some of that glorious diamond blue water on your shoulders for me. Just make sure not to tell anyone, it’s still a secret after all. 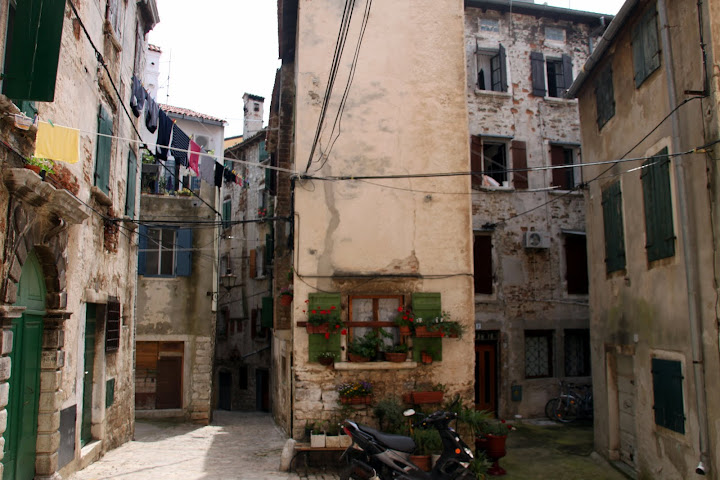