At AirTreks, we see a lot of crazy trips: almost everyone who travels with us has a story about the life-changing qualities of travel. And by definition, an RTW trip is going to take people to some wide-ranging places. Here are four trips our travelers are taking in 2017 that we felt inspired to share!

Around the World At 80 Years Old 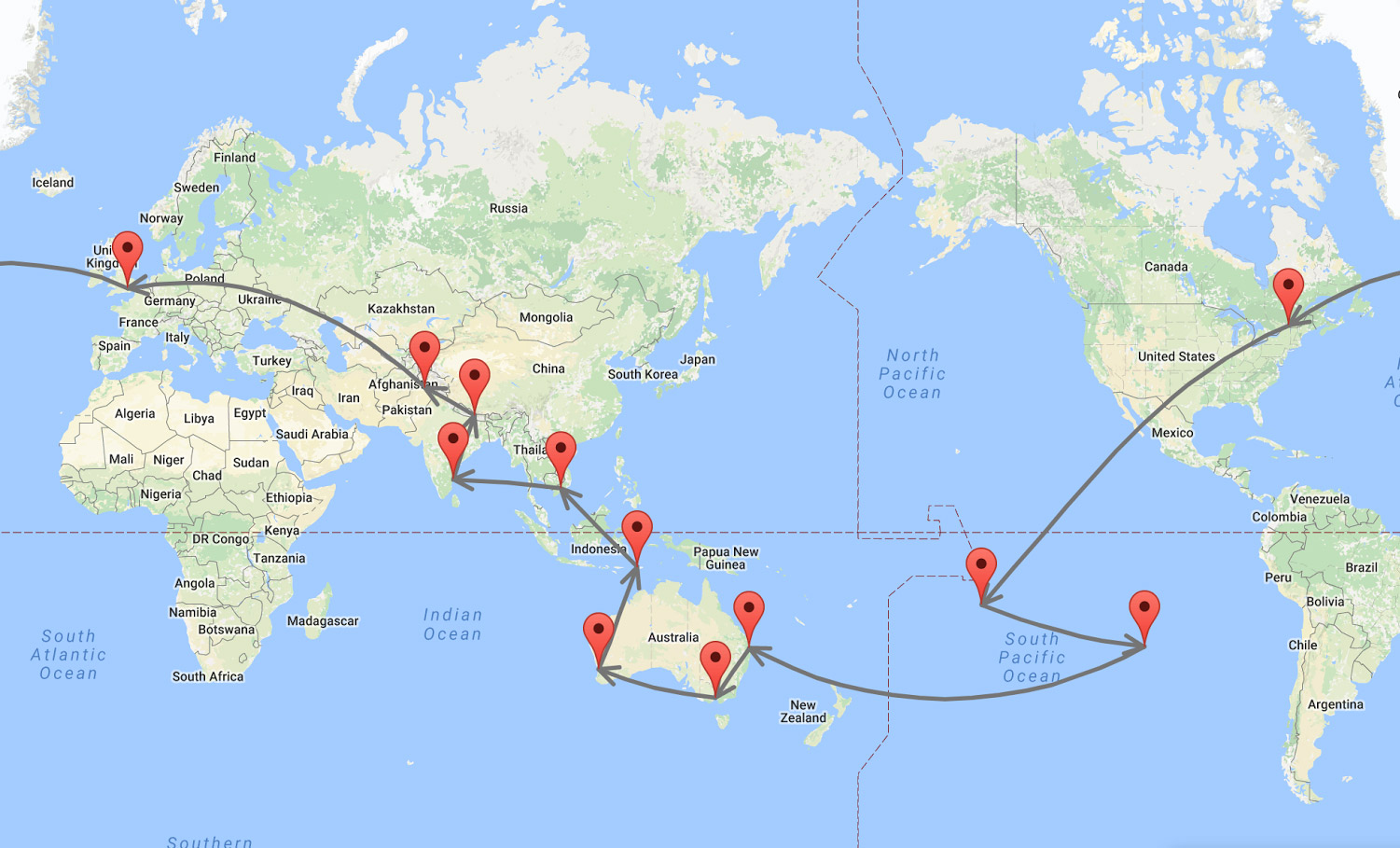 We’re really excited to share about Lucie, who’s taking a trip all the way around the world. Now, this isn’t that different than most AirTreks trips. So what’s special about her? Well, when Lucie reached out to us via Facebook we instantly thought something was extremely special. Lucie is 80 years old! And she’s got the incredible energy to fly the following route:

She starts in Montreal, continuing to the beaches of Tahiti, Easter Island, then going on a route around Australia through Brisbane, Melbourne, and Perth, Next she flies to Timor, Saigon, Chennai, Katmandu, then from Islamabad she flies through London on her final way back to Montreal.

It’s an exciting itinerary for anyone: now, imagine doing this at age 80! We’re enjoying making sure Lucie has excellent customer service for her flights throughout her entire trip.

Enes – Tracing the path of the Turks 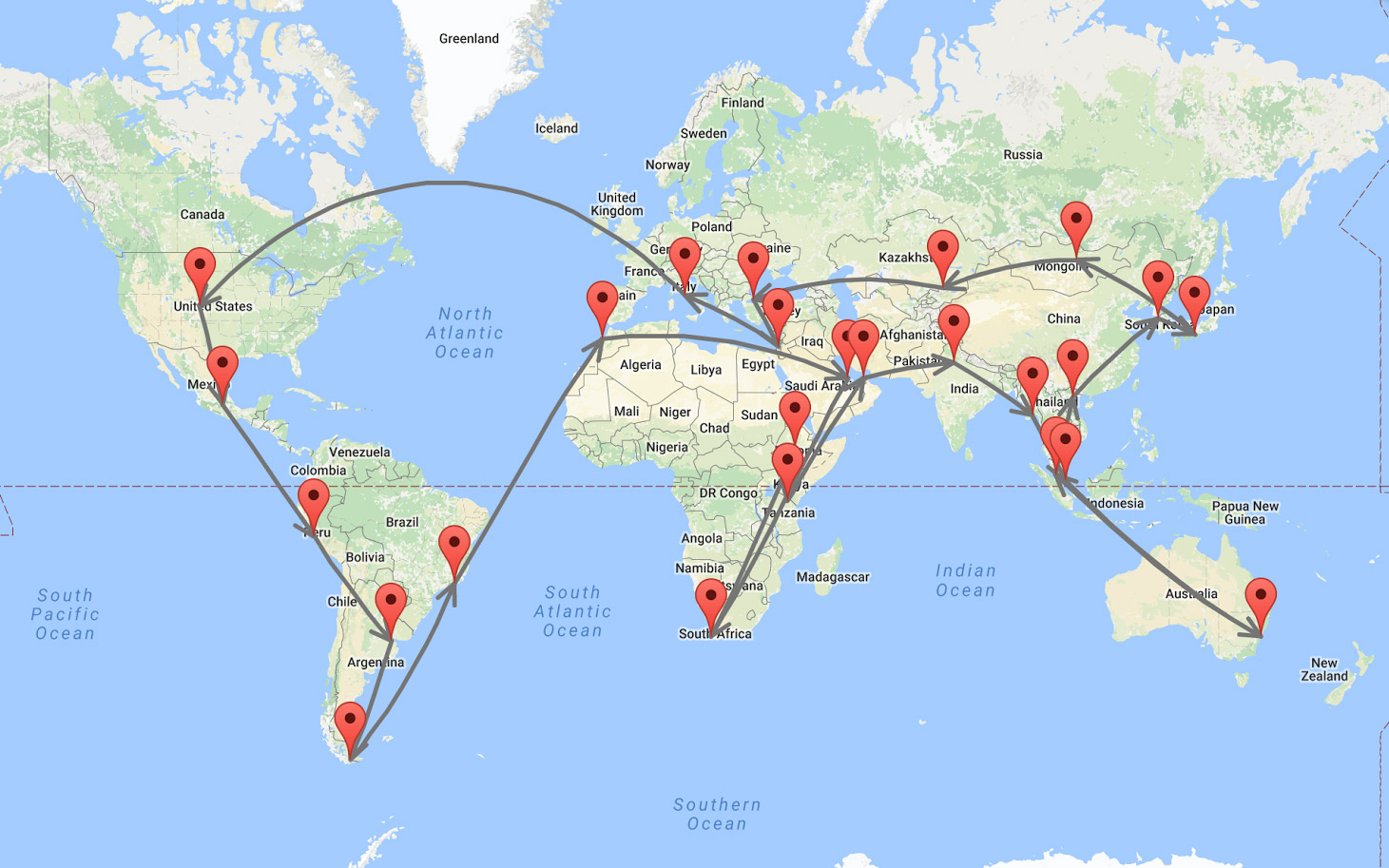 Enes caught the travel bug, as many of us do, and wasn’t satisfied with the typical resort visits in Mexico that he grew up with. After tasting what’s it’s like to explore a little further, he decided to take a year to trace the historical path of the Turks (originally nomads from Mongolia who moved westward).

And while he is at it, his goal is to hit the Seven Wonders of the World! He visited the Great Wall of China last year, and will be covering the remaining six with his AirTreks ticket. Right now, all he has left is two: the Coliseum in Rome, and Petra in Jordan. The others already crossed off include Chichen Itza in Mexico, Machu Picchu in Peru, the Christ the Redeemer statue in Brazil, and the Taj Mahal in India. His route covers most of the world! 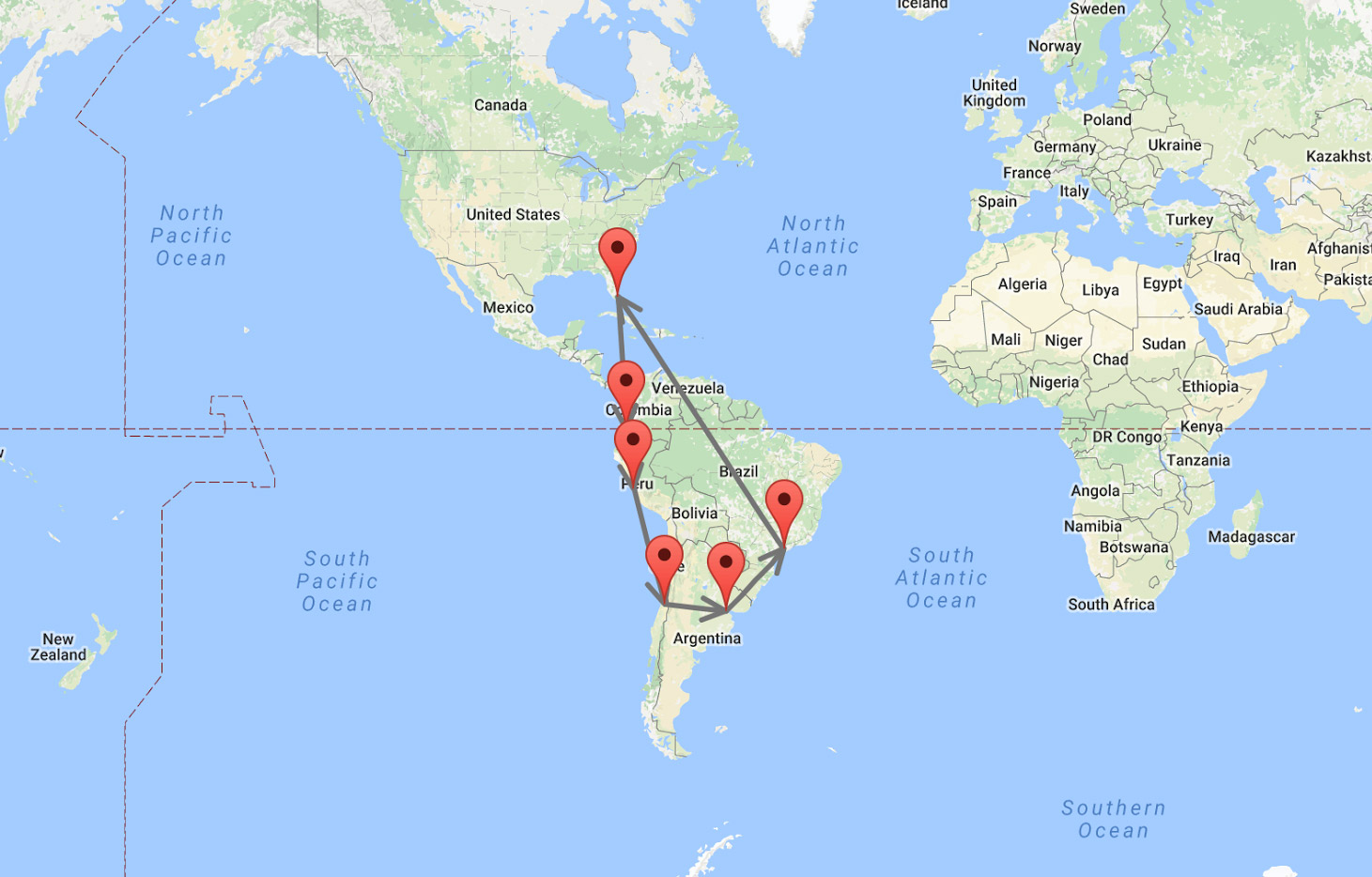 A popular route special, this circuit is taken by many of our travelers! While flights to South America can be expensive due to the distance, this circuit makes it much more affordable to do a loop around Latin America. From Miami, the flight heads to Ecuador, Peru, Chile, Argentina, and Brazil before heading back to Miami.

You can purchase this route yourself on our specials page. 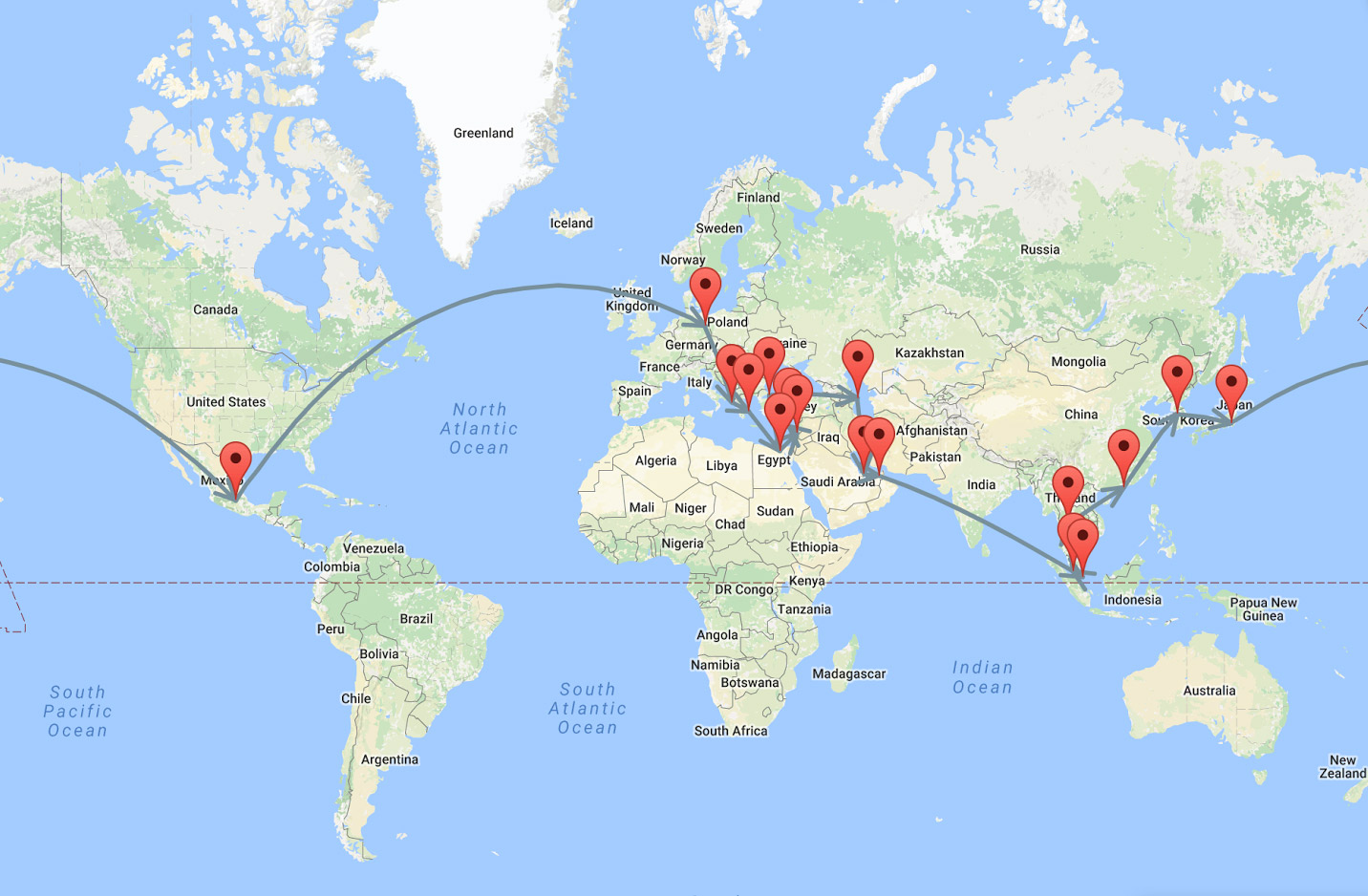 While most of our longest trips are developed in conjunction with our travel planners at AirTreks, our DIY tool to find flights around the world, Indie, can also handle some serious itineraries. One traveler just booked an amazing route around the world.

From Mexico City, he flies to Berlin, continues to Greece, Egypt, Beirut, a few other places in the Middle East, and continues to Southeast Asia where he visits Thailand, Hong Kong, South Korea, Japan, until finally he heads back home.

50 Legs Around The World In A Year 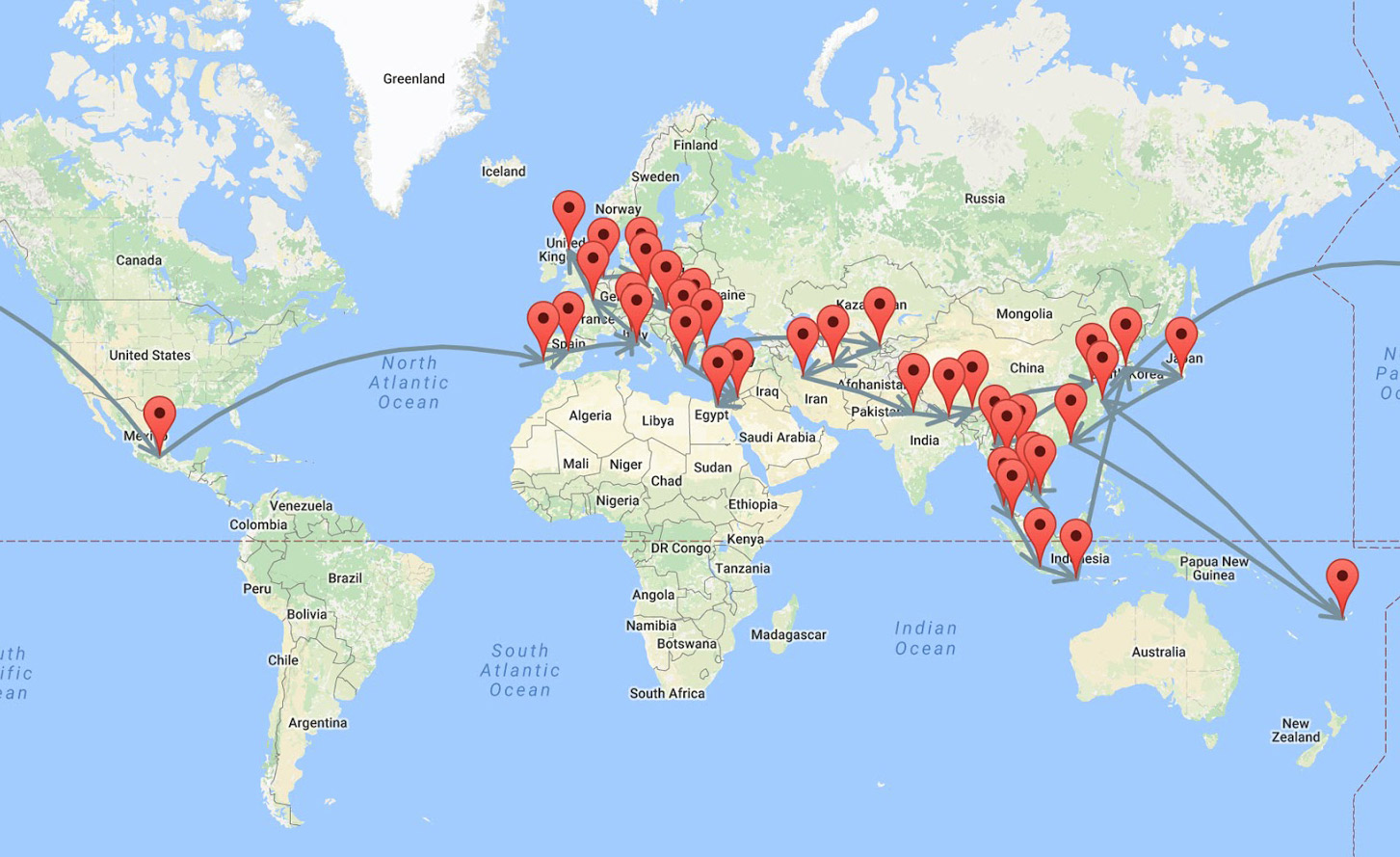 And last but not least, one of our travelers just left on a year-long trip around the world, hitting around 50 countries!

Travel is intriguing, and the greatest thing about it is that there’s so many ways to do it! Some people camp out in one country for a year. Others hit a new place every few days. And some are a sort of hybrid: hitting all sorts of destinations quickly, and then coming back to their favorites later.

Just to illustrate the scale of his journey, there are 196 countries in the world. And he’s going to hit a quarter of them in one year.

One of the best parts about this trip is that he’s visiting some rare gems: Uzbekistan, Turkmenistan, Iran, Laos, and overlanding a few times, which will let him see places in Central Europe and Southeast Asia.